I love snow days! I usually hang out in the house and make goodies all day. Today I cleaned one closet and said "enough of that". Then I made Salted Chocolate Caramel Pecan Turtles (also known as Millionaires Candy) with my special twist…..sea salt and I have the recipe for you. I also made a pot of Chili for supper and Chocolate Haystacks and Butterscotch Haystacks. On a roll! 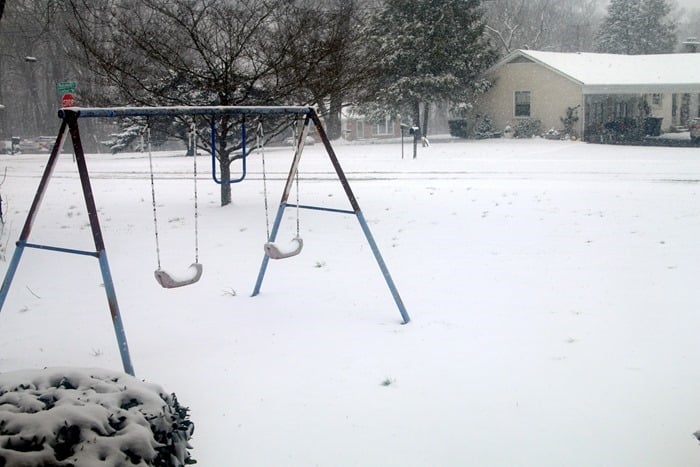 I was a busy girl. After I made the candy I delivered some to several neighbors. I like to get out in the snow for a while but I don’t like staying out long enough to get my hands and feet cold. 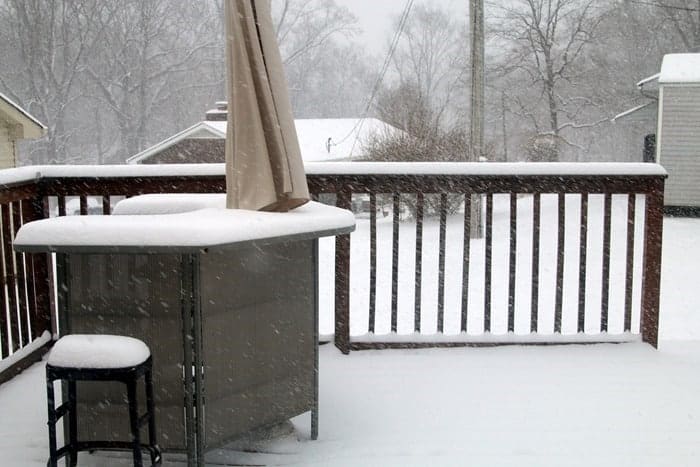 We may have to make snow ice cream tomorrow. The snow is very fine and powdery. I think we got at least 6 inches. 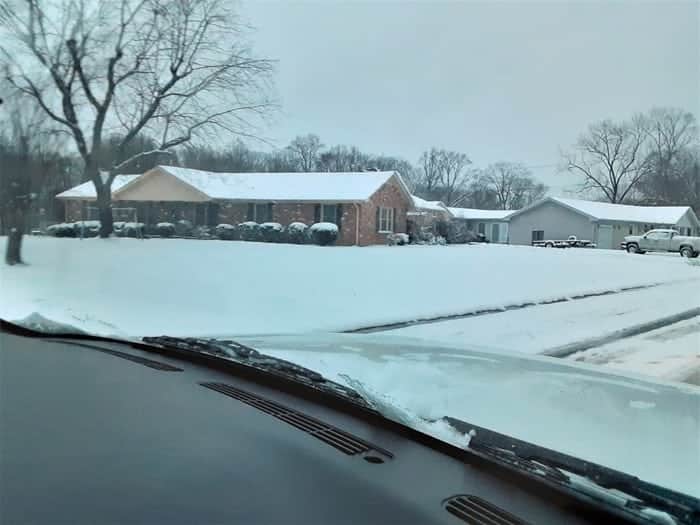 Ms Sofi spent part of the day with us then we took her home just before dark. . The roads were pretty bad but in the big truck I didn’t worry about it too much. I took the photo of our house when we were returned home.

I cleaned the closet in one of our guest bedrooms before I started cooking. This is the “Blue Bedroom”. I started moving furniture out and decluttering a few years ago. Now it doesn't take long to declutter again. 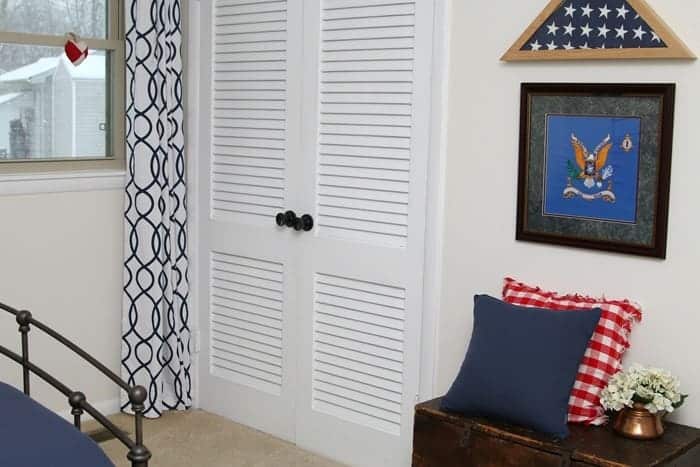 Our bedrooms are small and using the minimum of furniture makes them feel bigger. 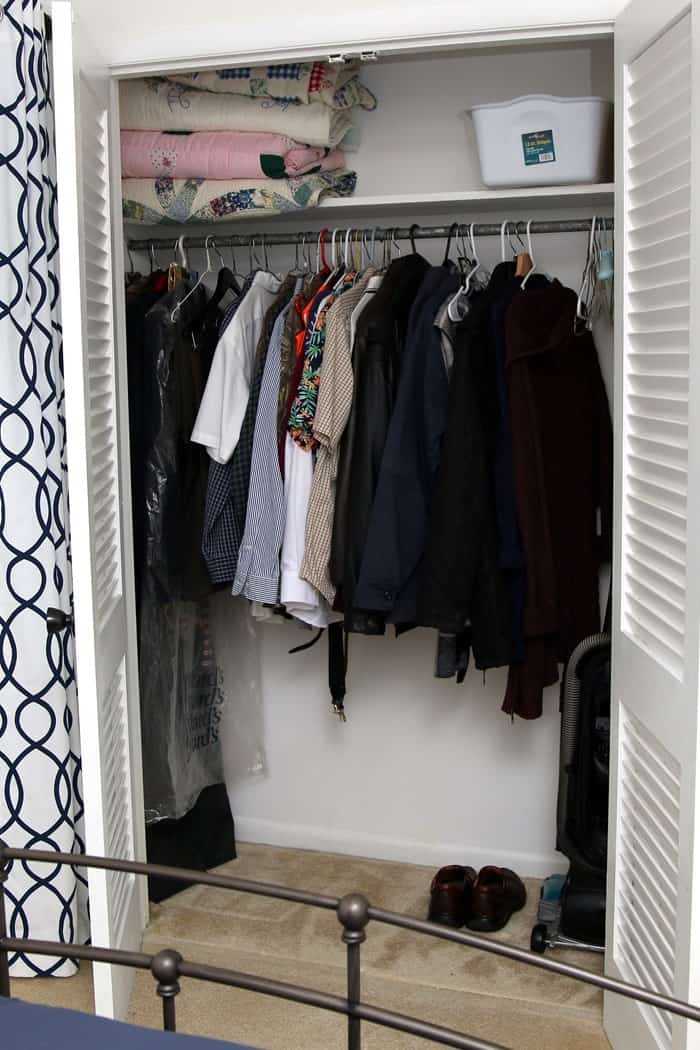 I went through the closet and weeded out the clothes we hadn't worn in a while. This closet is overflow for seasonal clothes. As you can see our closets are small. The one in our Master Bedroom is smaller than this one! 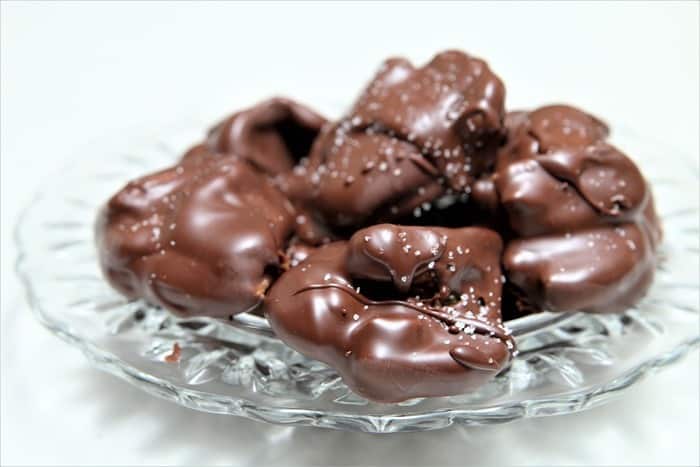 Now I’m going to share my Salted Chocolate Caramel Pecan Turtles Recipe. This is a family favorite and I have to make it every year during the Christmas holidays. The recipe I have actually calls it Millionaires Candy. I'm not sure but I think at one time a company made boxed candy called Millionaires and them later another company made something similar named Turtles? Whatever you call them, they are good and this is the third batch I made this holiday season. 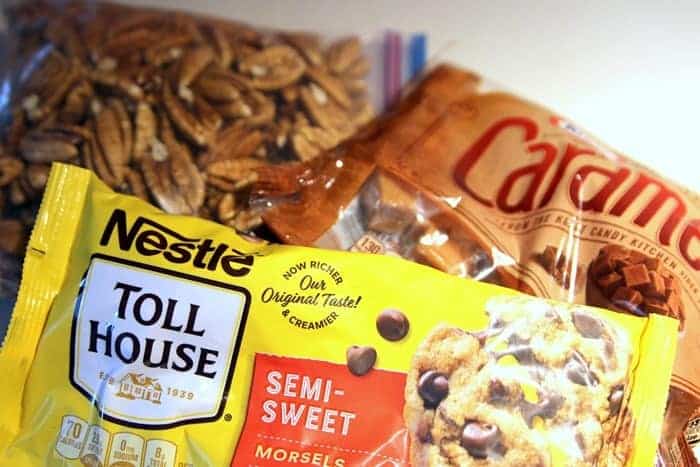 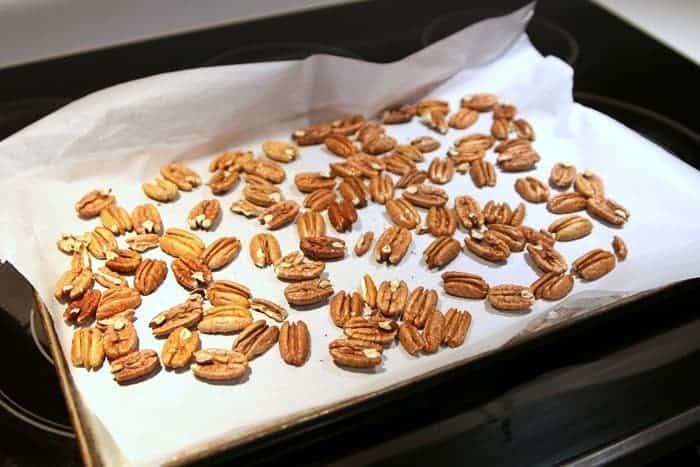 First thing I do is toast 2 cups of pecans. I use whole pecans for this candy. I've made this recipe for years and this is the first year I have toasted the pecans. I think the Turtles taste much better. I toast the pecans at 350 degrees for 10-12 minutes. (The full recipe is below.) 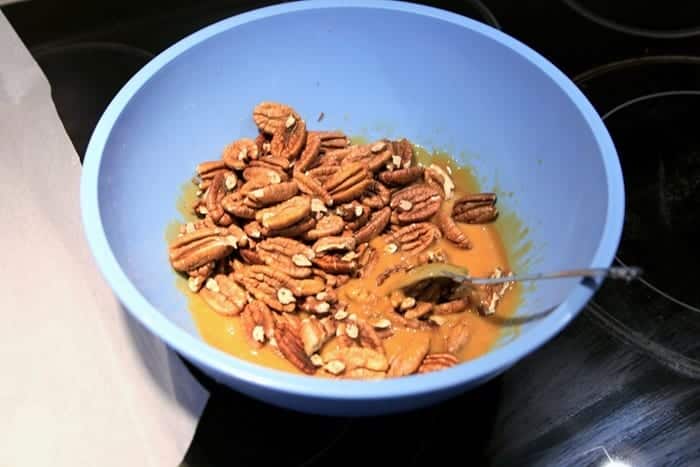 I melt the caramel with milk in the microwave then add the pecans and stir well until they are covered with caramel. 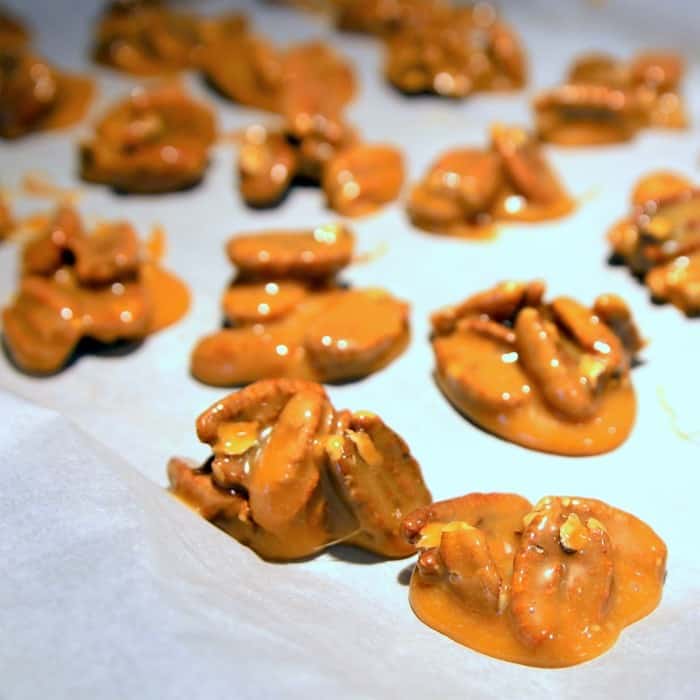 I drop the mixture onto a parchment lined cookie sheet and put in the freezer to set up. 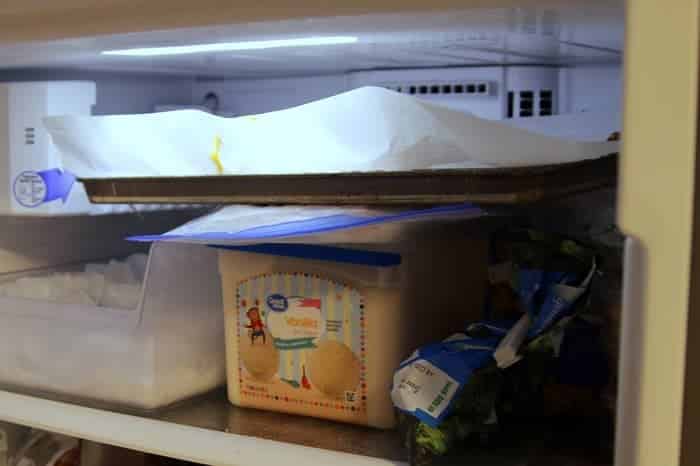 You could also just set the pan in the refrigerator but the candy will take a while to harden enough to dip in the chocolate. 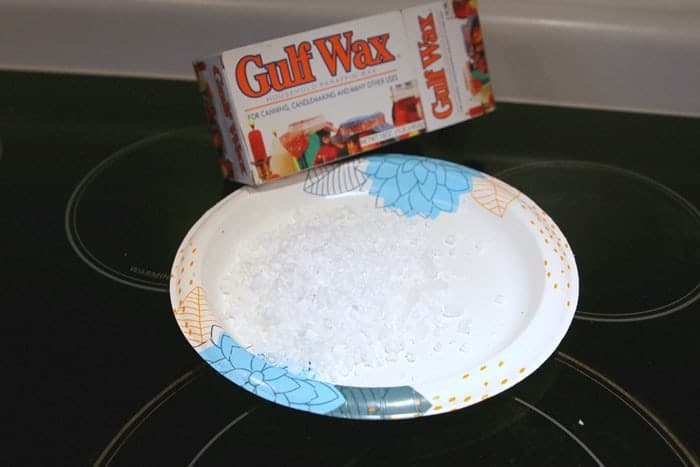 Next I grate a block or half block of paraffin. I know it says not to use the paraffin for cooking but I've been doing it for years and I'm still here. I tried the dipping chocolate recipe that uses two tablespoons of shortening instead of Paraffin and the chocolate was really thick. I also tried the chocolate bark but it seems grainy. 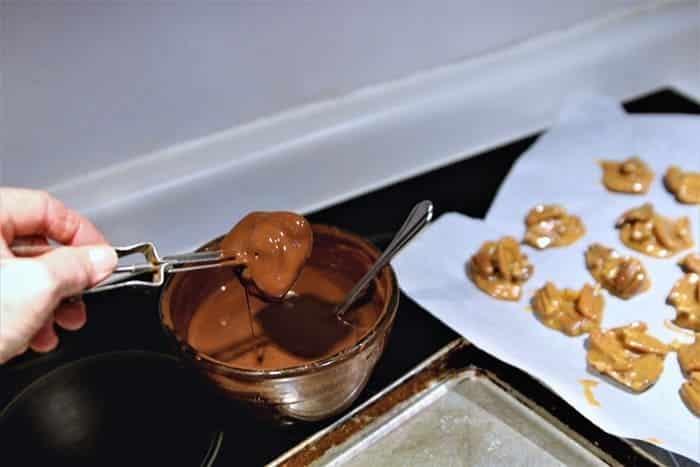 Once the caramel and pecans are firm I dip them in the chocolate. Next I sprinkle sea salt on the chocolate. You have to do this before the chocolate hardens. So dip a few pieces in chocolate then sprinkle with sea salt.....repeat. Place on parchment paper and freeze them until set. Store in the refrigerator in a cookie tin. That's it. 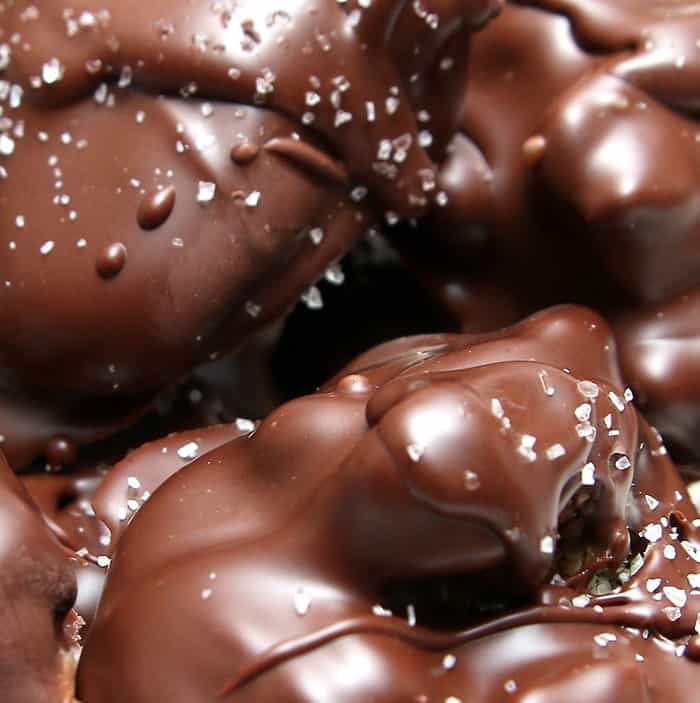 This is also the first year I used sea salt on the candy. I love sea salt with caramel and now I love it with chocolate too. 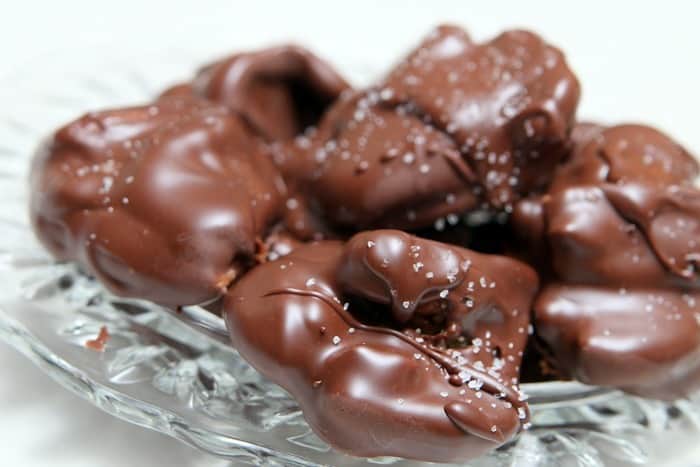 Spread the pecans on a baking sheet covered with parchment paper. Toast the pecans for 10 to 12 minutes at 350 degrees.
Stir once during cooking.

Unwrap caramels and put them in a large bowl with the milk. Melt in the microwave in 20 or 30 second increments.
Be sure and stir the caramels between microwaving to help melt. Don't burn the caramel.

Stir pecans into the melted caramels and drop by spoonfuls onto parchment paper. Put in refrigerator or freezer to set.

Use a grater to grate the block or ½ block of paraffin. Put the paraffin and the chocolate chips in a glass bowl and microwave in 20 to 30 second increments. Stir between each microwave interval. If the chocolate gets too hot it will seize on you and nobody wants that. 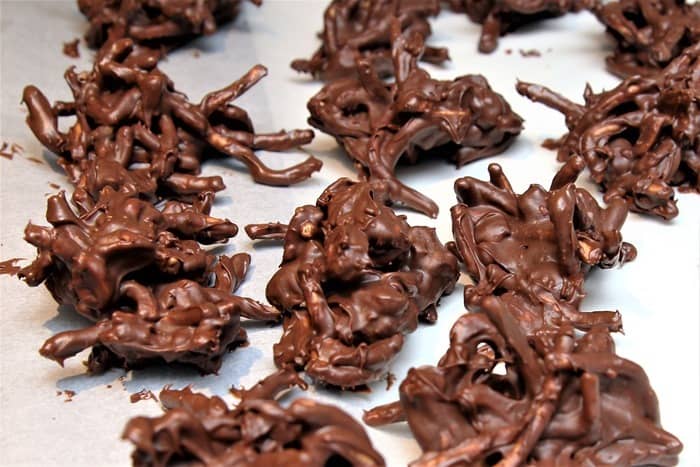 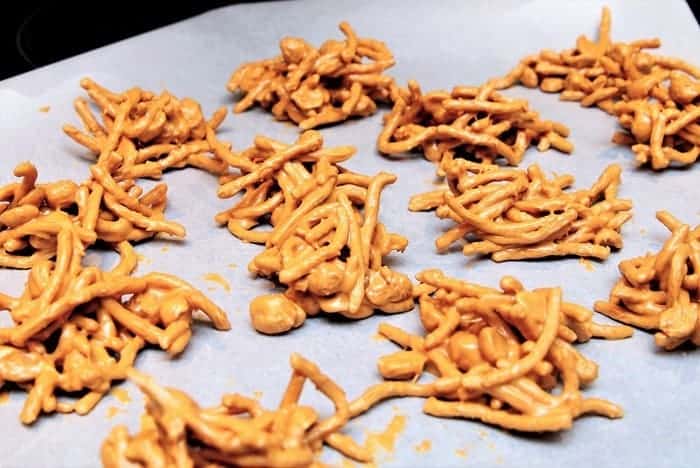 Then I made Butterscotch Haystacks with peanut butter, butterscotch chips, chow mien noodles, and dry roasted peanuts. They were yummy! 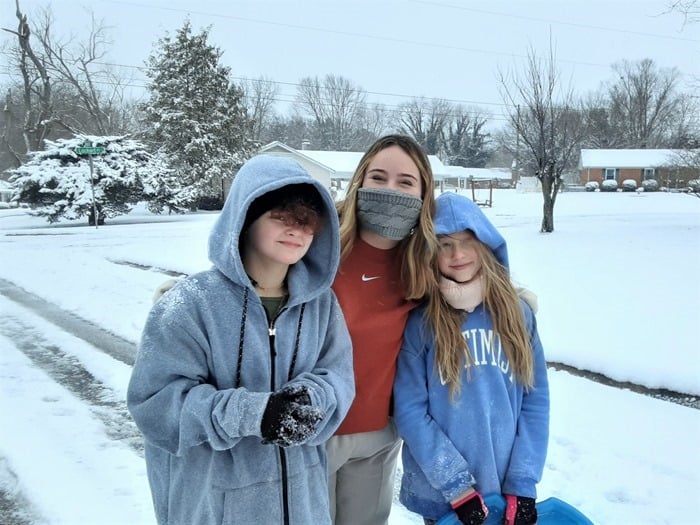 Sofi (on the right) enjoyed playing in the snow with her friends. That’s it for me. Did any of you get snow? Leave a note if you have time. I'm working on a piece of furniture too. Post to come next week. Thanks for being here, Kathy