This project shows how a simple furniture finish touch up and new knobs can modernize older furniture. Sometimes all the stars align and you find a piece, or two, of furniture where the price is just right and the condition of the furniture is great.

I lucked up on those perfect conditions last week at my favorite junk shop. I bought two pieces of furniture for $45 or $22.50 each. After touching up the top of the first piece, a vintage server, and adding cool new knobs I moved it into the house! 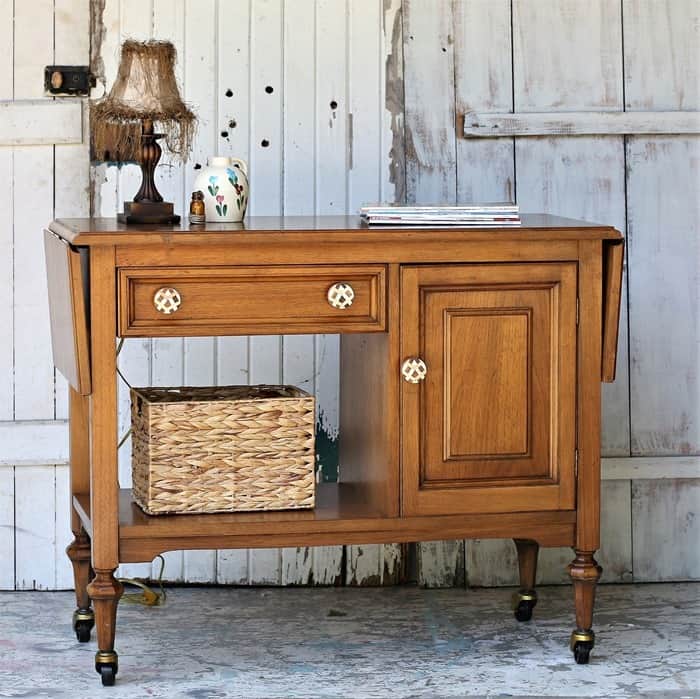 This is how the first piece looked after I touched up the stained finish and changed out the knobs. Nice, isn’t it? 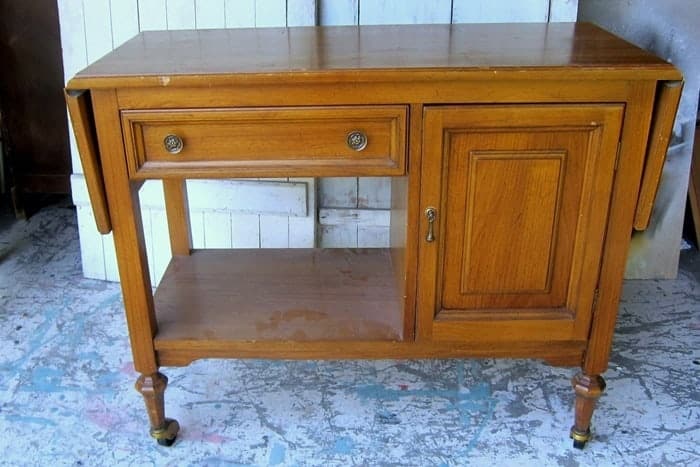 This is how it looked when I brought it home. A bit humdrum and definitely in need of cleaning. 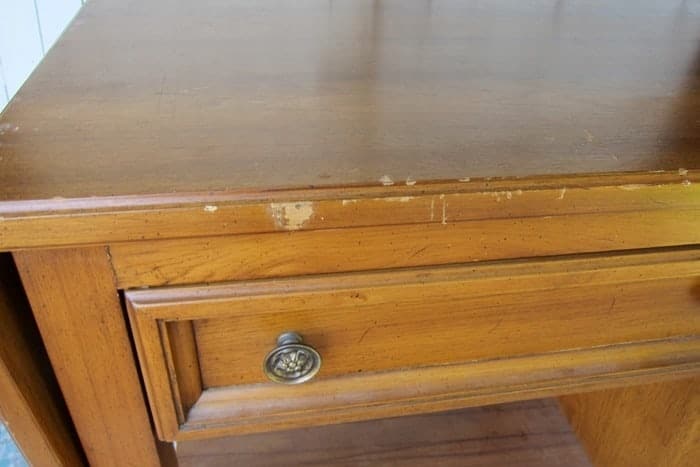 The top was scratched up and dinged in several places. 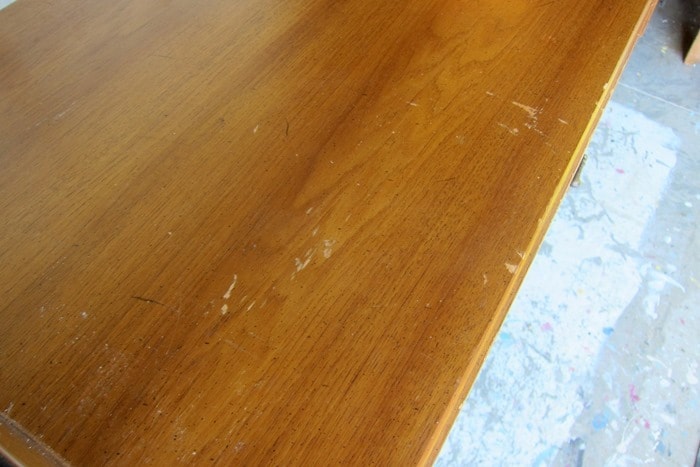 I've been looking for a few Mid-Century Modern pieces for various rooms in the house and haven’t found anything yet. Those pieces are hard to find.

I decided this piece was close enough for now and I would use it in Miss Sofi’s bedroom at the house. Now to take care of that messed up finish.

I was tired of the painted piece in Sofi’s bedroom and ready to go in a different direction so no paint for this piece. I could have painted the top only and seriously thought about it. After my clean up and touch up there was no need for paint. Turned out better than I had hoped. 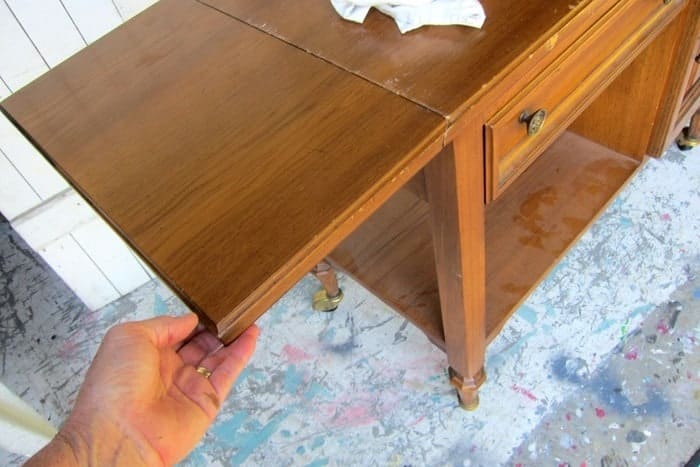 This piece is a server and I really wanted to take off the two drop down sides. Of course I would save the side pieces to put back on at a later date if I decided to sell the piece or use it elsewhere. 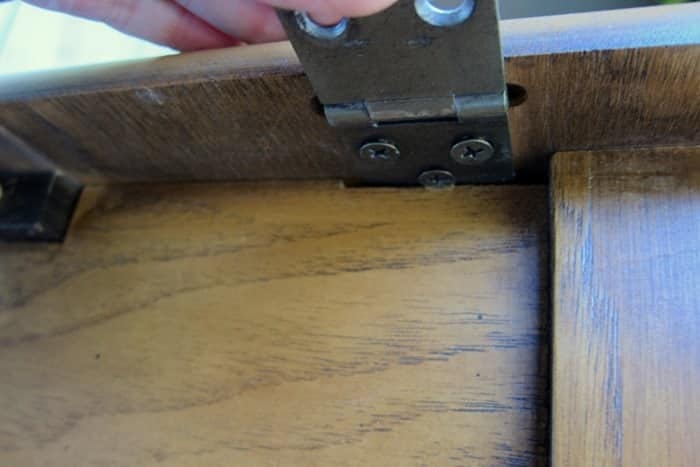 That didn’t work out as I planned. I removed one of the drop down sides and started removing the hinges when I ran into a problem. You can see in the photo above that one of the screws is right above the side of the server.

All of the hinges were like this. The screw butted up against the wood beneath it and impossible to drop it out.

No way to get the screw out without taking the top off and I wasn’t ready to go that far. Too much work then you never know if it will go back together properly. So I just put the drop down side back on the server. 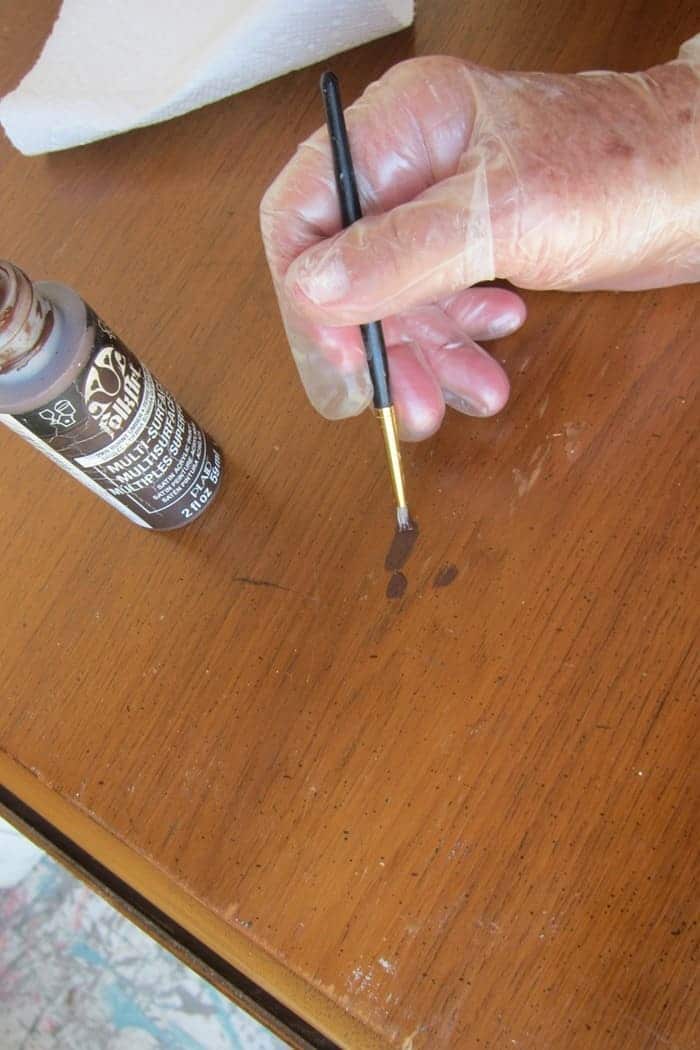 I tried using stain markers to touch up the scratches but didn’t  have a lot of luck. I thought about it and decided to just try some brown paint. I brushed the paint on the scratches and dings. 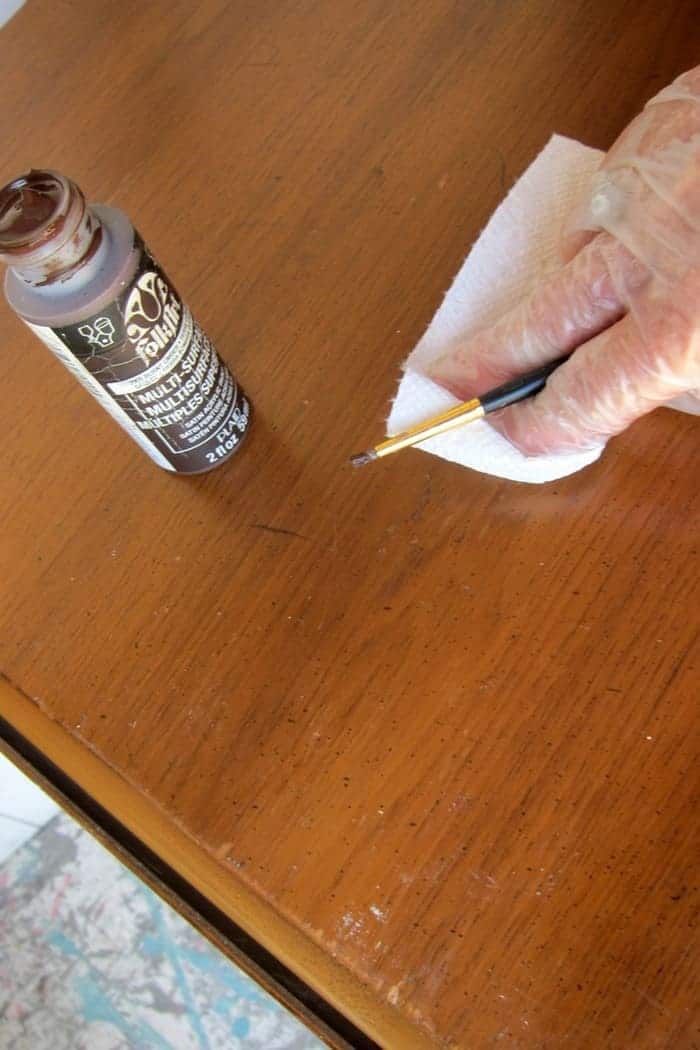 Then I immediately wiped the paint off with a paper towel. This worked great on most of the scratches but some of the deeper scratches didn’t take the paint or the stain marker very well. 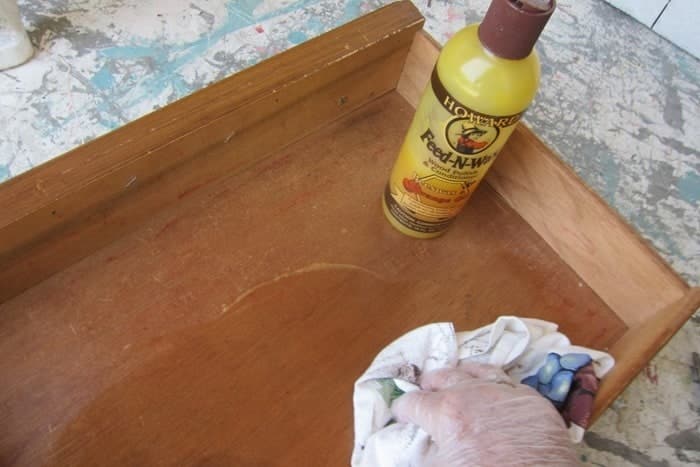 The inside of the drawer was a mess and I used Howard’s Feed n Wax on it along with the body of the server. The Howard’s helped cover up the minor scratches. 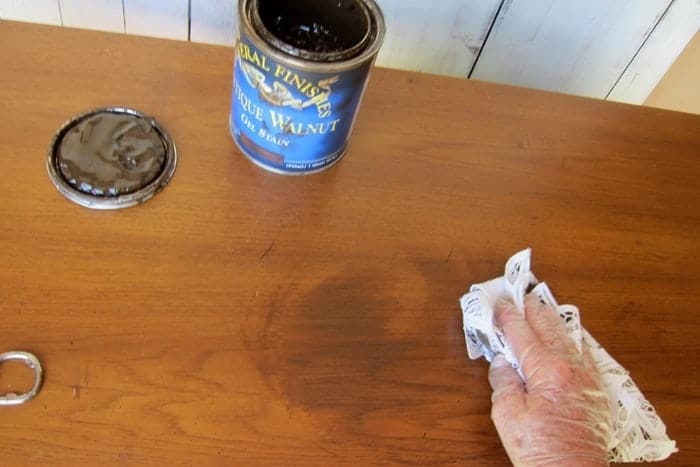 Next I pulled out the heavy guns…..General Finishes Gel Stain. It’s to be used on unfinished wood but I thought what the heck and wiped on a coat of the stain. The wiped it off right away.

It did darken the stained top just a bit and helped cover the scratches. I only used the General Finishes on the top of the server. 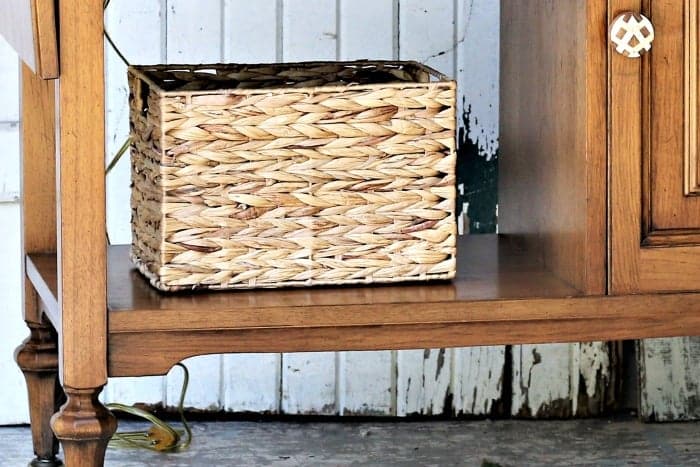 One thing to note is it did feel tacky after 30 minutes of drying and I rubbed and rubbed on it with a lint free rag. After I moved the server into the house I noticed it wasn’t tacky anymore. 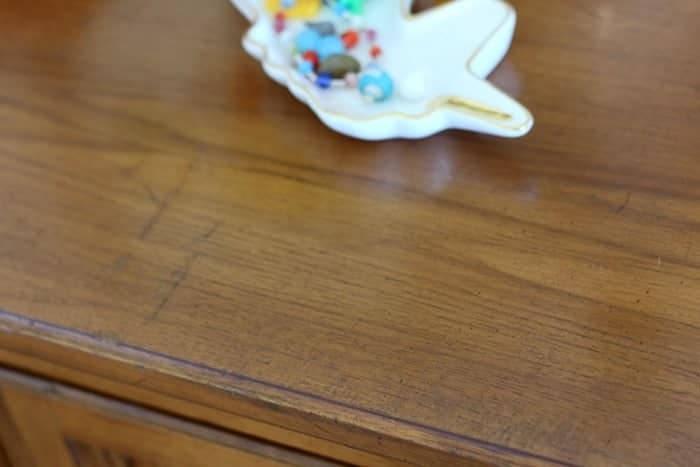 This photo was taken after I moved the server into Sofi’s bedroom. You can see how nice and shiny the top looks now. 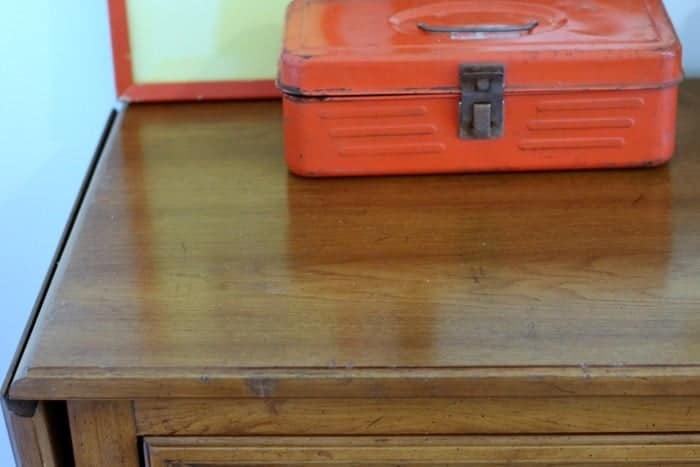 Of course the surface isn’t perfect looking but you don’t notice the scratches unless you look closely. 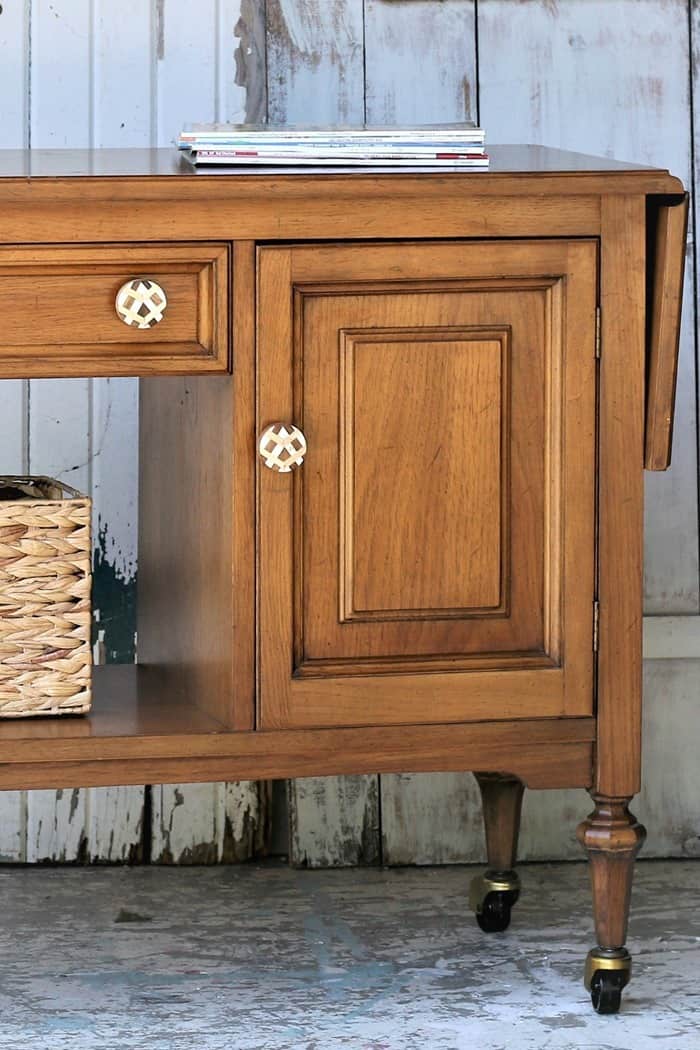 The new knobs are my favorite part. What a difference they make. The server now looks like it’s part of the twenty first century. 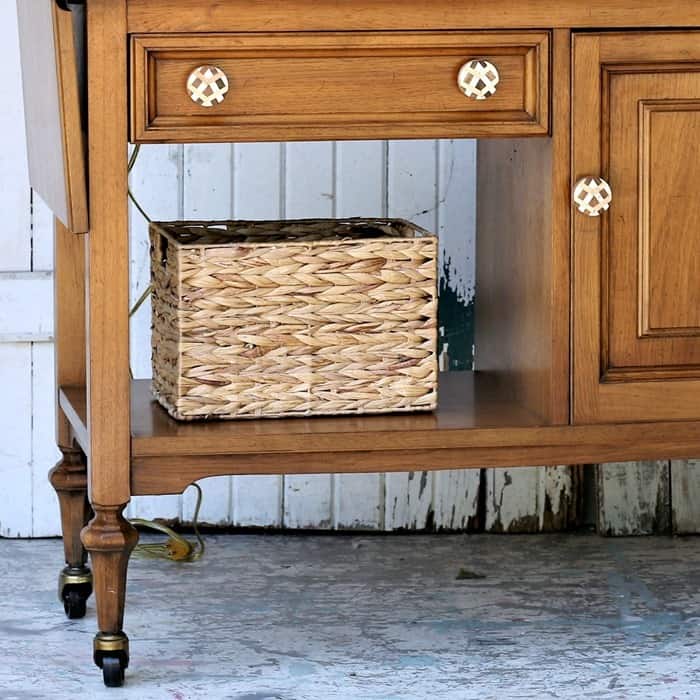 The knobs came from Hobby Lobby. At 50% off they were $2 each. So the server cost less than $30. After I moved it into Sofi’s bedroom I redecorated the whole room without purchasing anything else. 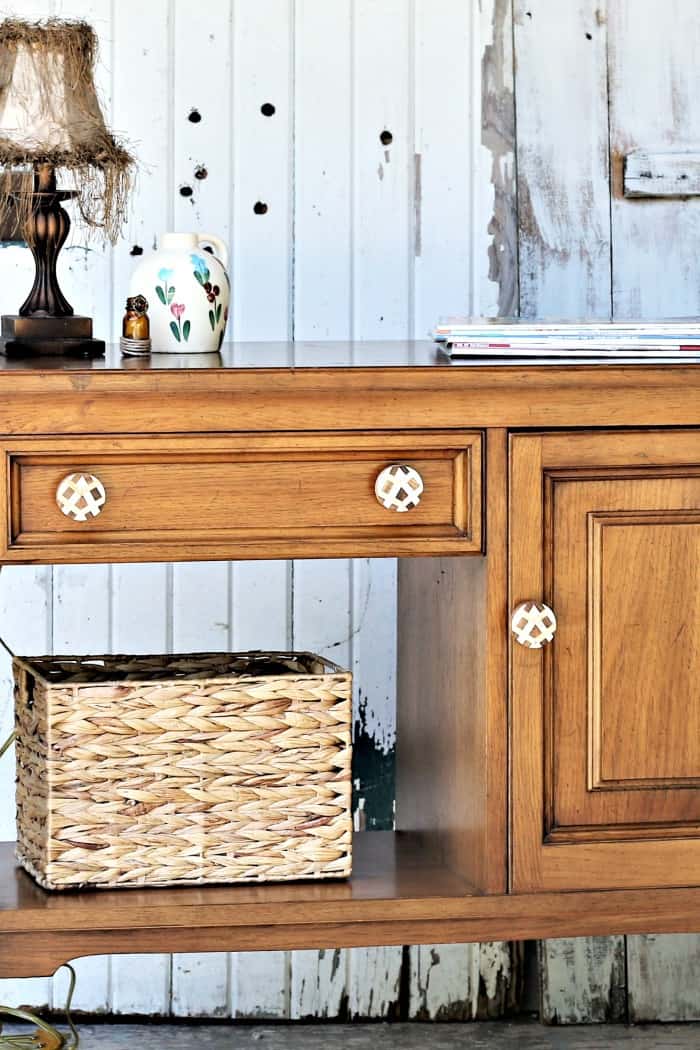 You have to see how it looks now. It’s so pretty and I hope Sofi likes it. I’ll share photos later this week or next week. 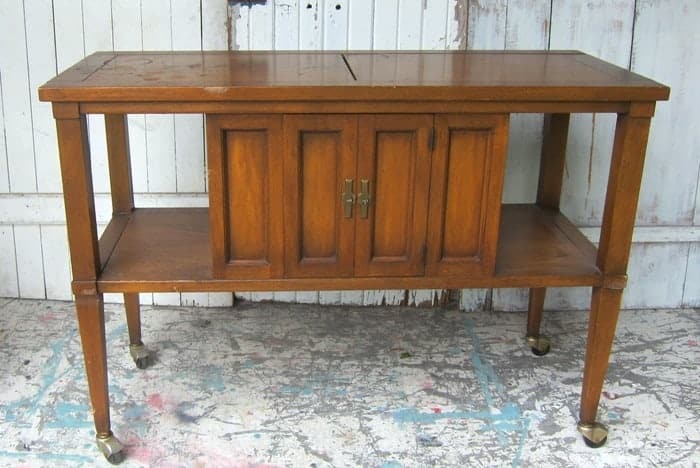 This is the other piece I bought for $22.50. I cleaned it up just like the other server and have plans for it that I’ll share later.

If you like to see the original finish freshened up you have to see this piece that was a hand me down from a dear grandmother.

What did you think of my attempt to refresh the top….and the new knobs, love or hate. As always thanks for being here, Kathy