I know ya’ll remember the vintage radio cabinet from my post last week. I passed on it because of the condition and the price. The price was $60 and it was in terrible condition. Several of you offered advice on whether to purchase it and also suggested offering less money for the cabinet. 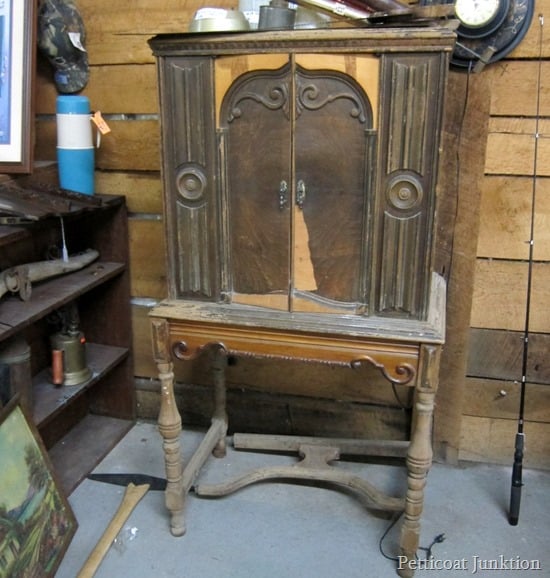 The brand is Majestic and it was manufactured in Cincinnati. If you remember I was torn after I left the shop….thought maybe I should have bought it. I asked you guys and the comments were running close to  50/50   leaning slightly toward buying, but at a lower price.

I went to the shop with the idea of offering $40 for the cabinet. I was so glad to see it was still there. It was a mess but it was still calling my name. And guess what?? There was a 30% off sign on the vendor’s booth. The sale price of the radio was $42……sold. 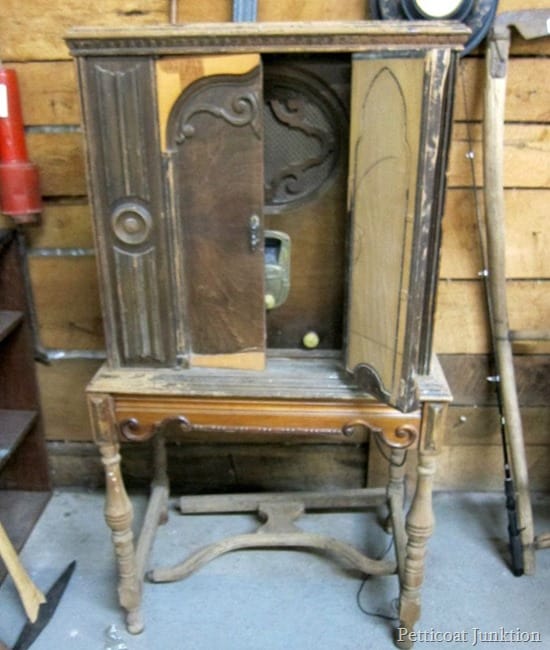 Here’s a look at the radio inside and you can see how the piece between the legs is falling off. 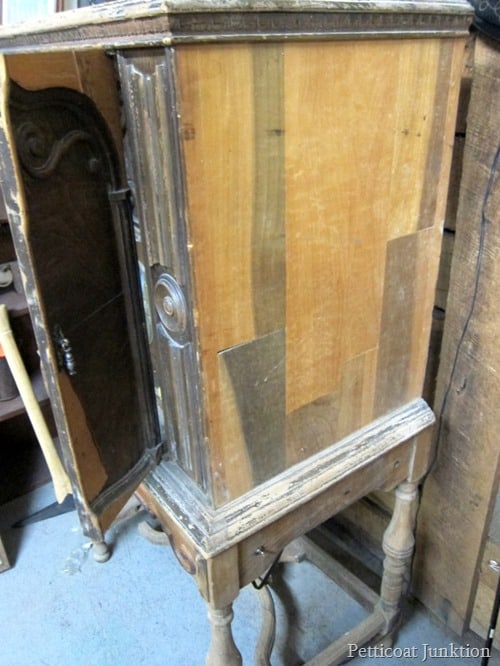 A lot of missing veneer and the top is a disaster. The JTS and I will have to take the radio out and do a major overhaul if this piece is going to look like anything. It's still sitting in the truck bed because it was so darn hot yesterday we didn't unload it. Maybe this morning when it's a little cooler.

Well we finally got the radio out of the truck. We were waiting on cooler weather or an early morning start before we hauled it to the workshop. Now the question is “What Now”? You can start throwing ideas at me anytime. 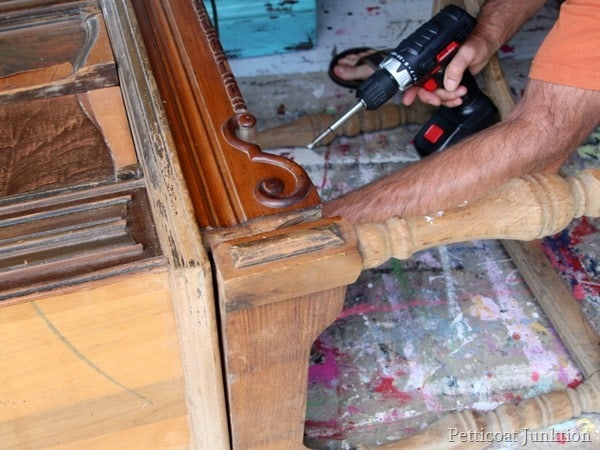 The first thing he did was remove the base and start gluing it back together. 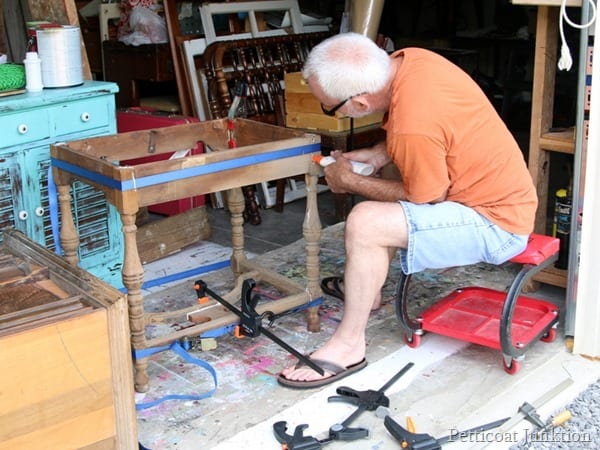 The top of the base was coming apart and the legs were all wobbly. I’m surprised the cabinet didn’t fall over. That’s how bad it was. 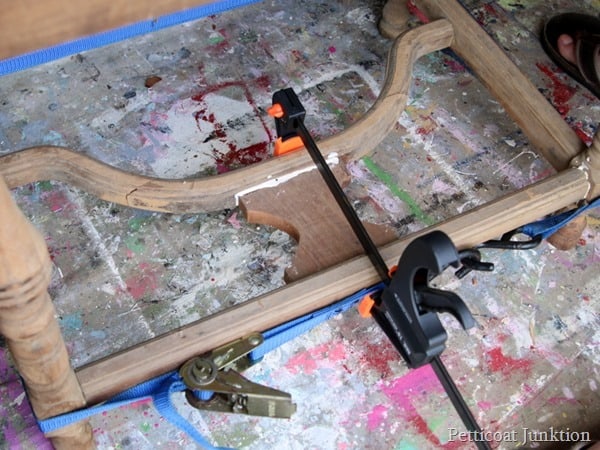 He used a lot of glue and clamps and straps. We will let the glue dry overnight then attach the top to the base. 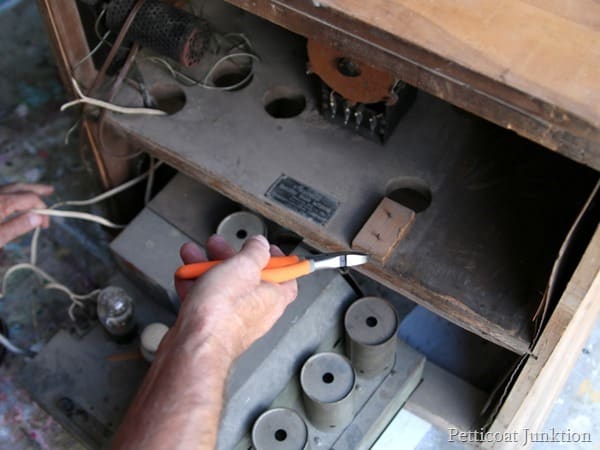 We started removing everything. Trying to find screws and bolts and figuring how to proceed was half of the project. Even though I've painted several of the radio cabinets this is the first one I purchased with the radio still inside. Don’t worry, I’m saving the good parts. Who knows what I might do with them. 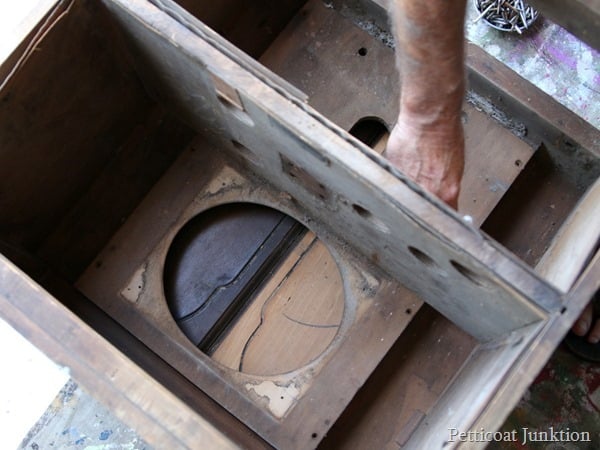 Removing that shelf was the hardest part. We used crowbars and hammers and took turns working on it. The shelf was tightly wedged in the slots.

Final part coming out. We didn’t even tear anything up. Not that you would notice if we did. The piece is a mess. 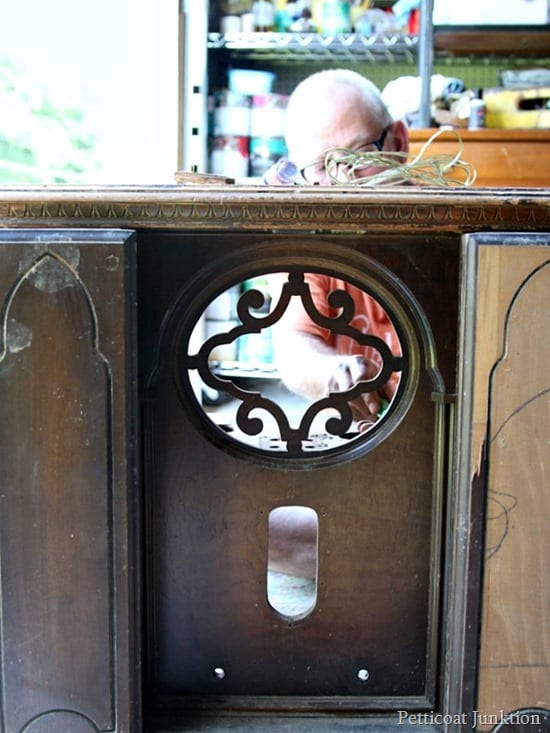 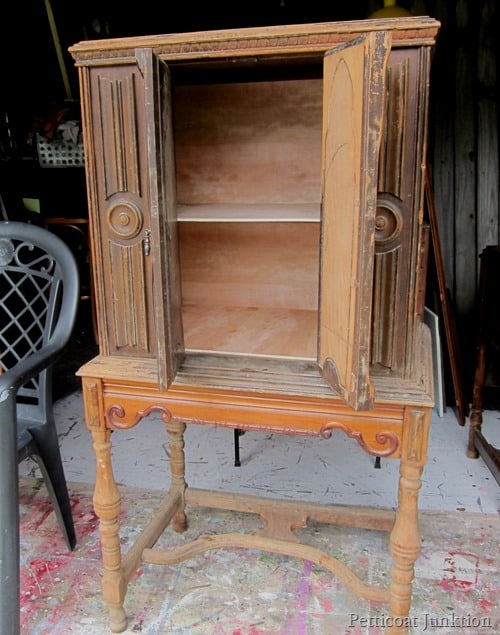 It’s actually pretty now compared to what it looked like before. All of the details make it beautiful!

After the glue dried on the base the JTS attached it to the cabinet. 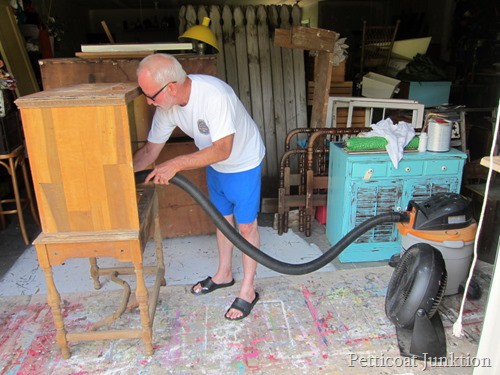 The cabinet was really really dirty and after all the work on it the clean up has to be done before painting can start. The JTS is awesome. Have you guys noticed that. I should be nicer to him. I’m trying to keep him down because of his health issues but it’s hard to do….as you can see. 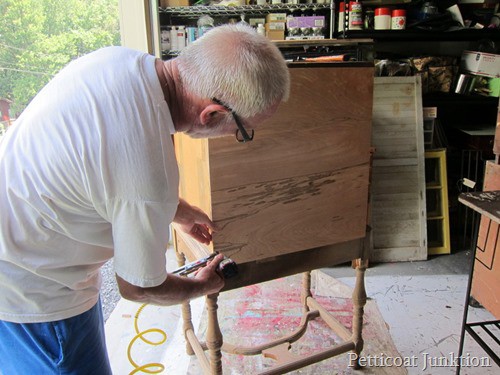 Next he put on a new back using a sheet of luan. 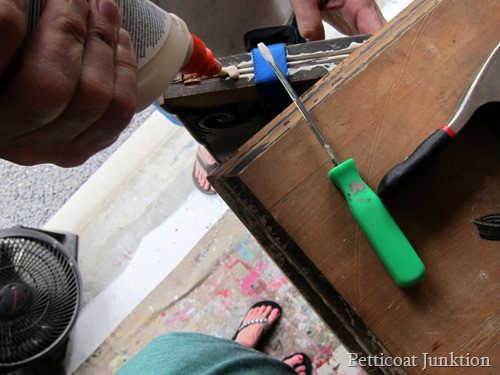 One of the doors was coming apart so out came the wood glue and clamps again. See my feet….I was there….taking photos. 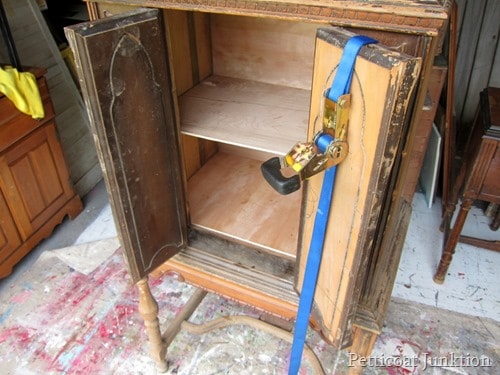 Those straps come in handy for all kinds of things.

It’s actually pretty now compared to what it looked like before. All of the details make it beautiful! 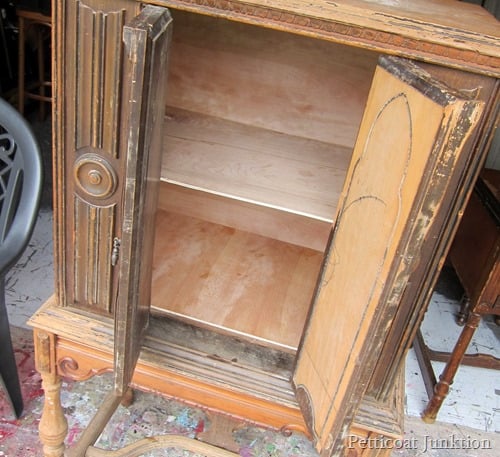 The JTS fixed it up good. After he did all the repairs he added shelves….. 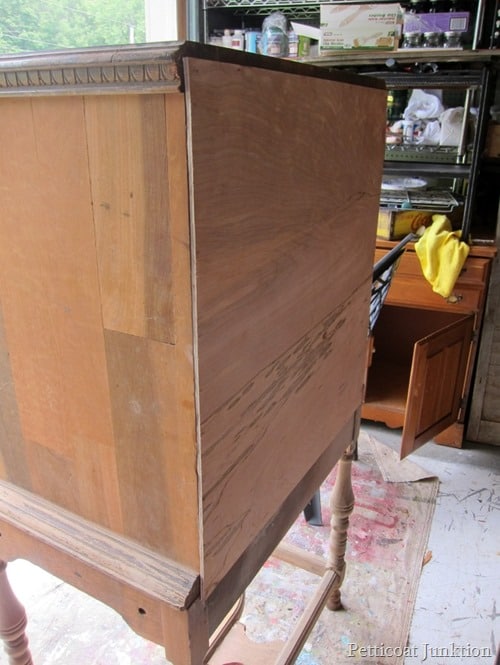 …and a back. I missed the photos with the table saw. Probably because I was helping. Table saws or power saws of any kind make me super nervous. I don’t mind using drills and sanders but the saws I don’t use very often.

Looks nice now doesn’t it. Can you imagine the hours put into this project already. I still haven’t decided on the paint finish for this piece. I want it to be special. Until tomorrow, Kathy