Removing An Antique Sewing Machine From The Cabinet

I should have counted the screws. But I didn’t. There are a bunch of them in those old antique sewing machine cabinets. The JTS was sick so I took it upon myself to tackle removing the sewing machine from the cabinet. It’s really not difficult. Just one screw at a time. 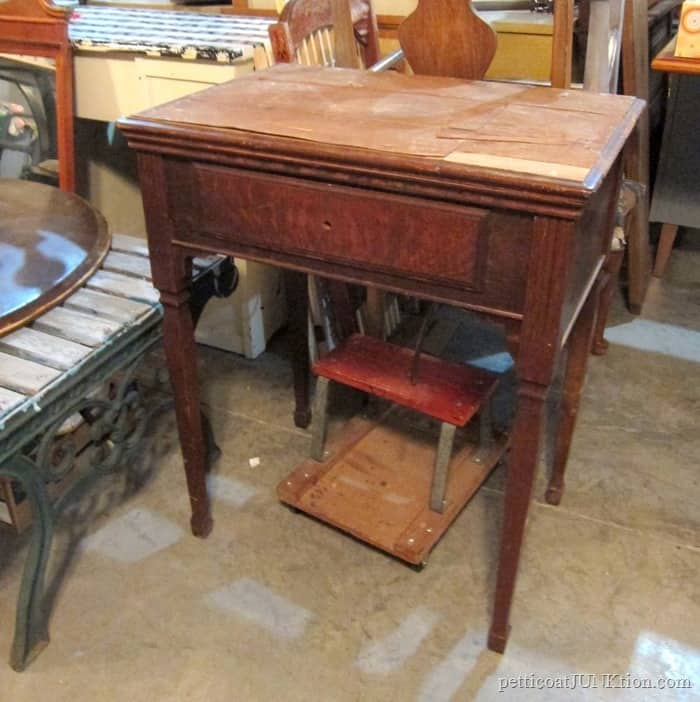 This is the sewing machine and cabinet I paid $2.50 for at auction a couple of months ago. No one else would bid on it so I did. The veneer on the top was peeling off….really bad. 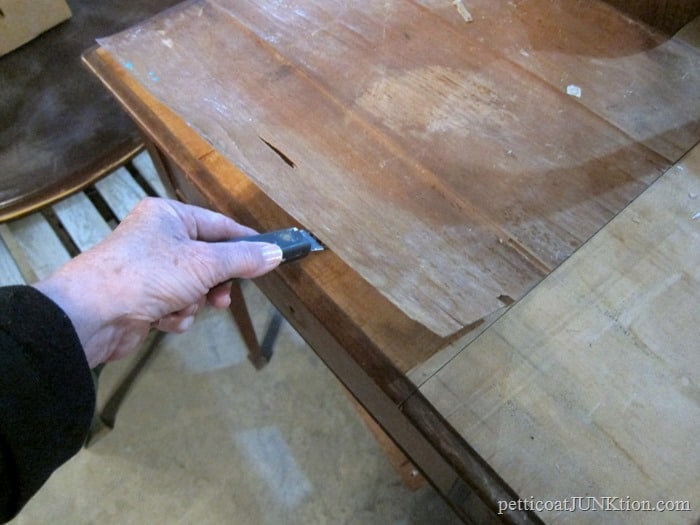 Which made it easy for me to slip a putty knife in between the veneer and the top and pop it off. 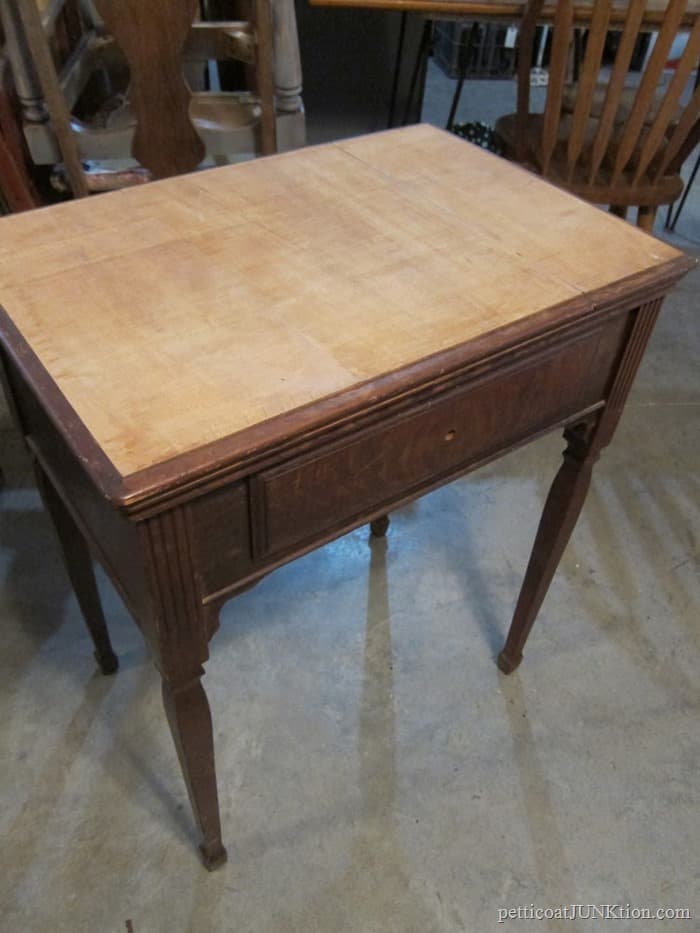 It came off just that easy. Five minutes or less and I was done. 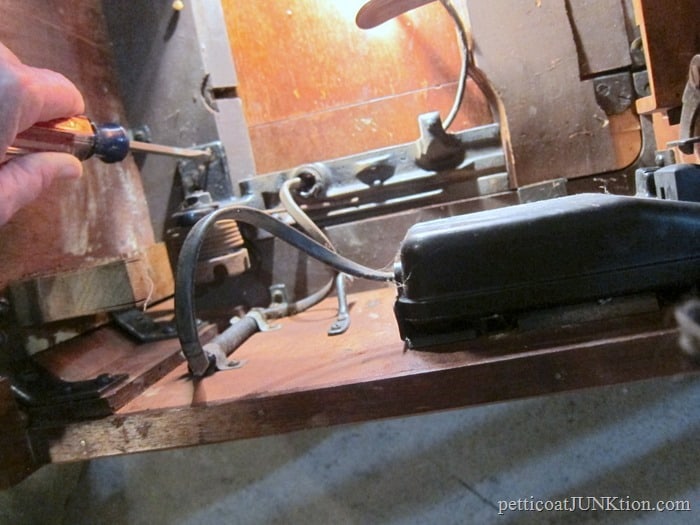 I started the sewing machine removal by taking the two round metal inset pieces that attach the machine to the cabinet off. I lifted the machine out and after that it was just a matter of tackling one screw at a time. There were several parts to remove like the foot pedal and holder, the swing arm, the knee “pedal”, and the spring attachment.

One thing to remember is not to remove the screws that hold the legs on the table. I did remove one of those screws before I realized it was one of several screws that attached the leg to the table. This point is a good time to tighten all the leg screws. 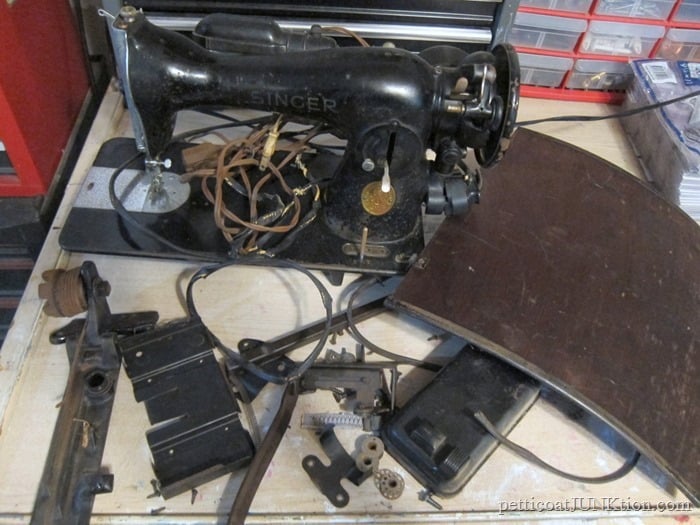 These are all the parts that came off of the cabinet including the curved wood protective bottom piece. I plan to remove a few of the parts from the machine itself to keep and then take the machine to the recycle bin.

Not sure how I will paint the sewing machine cabinet yet. I may not paint it. What do you guys think about polishing it all up and leaving it as it with the two tone wood look? 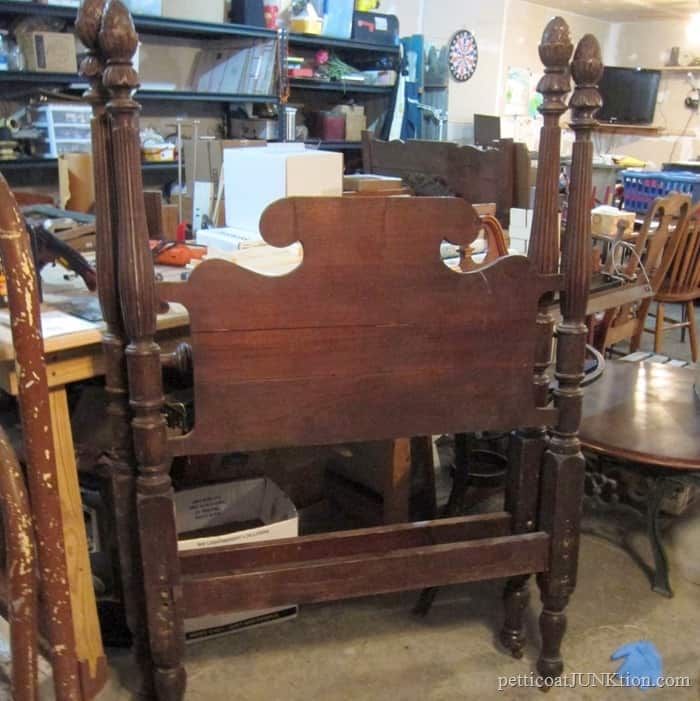 Moving on to my latest auction buys. The auction this past Saturday was awesome. I got the twin bed above with the rails for $10. Steal. 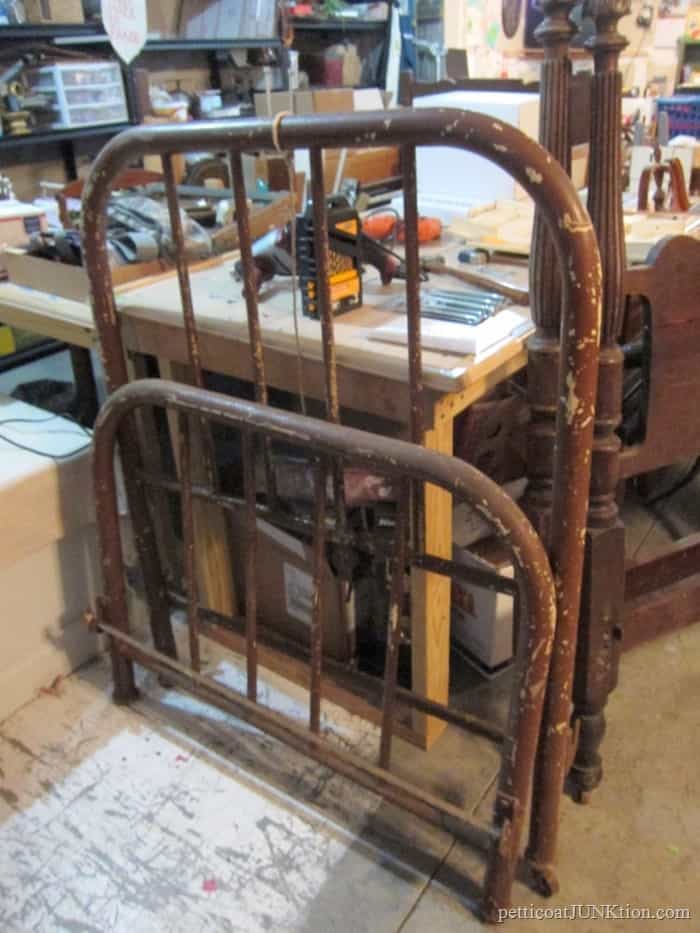 The iron bed with rails was $5. Another steal. 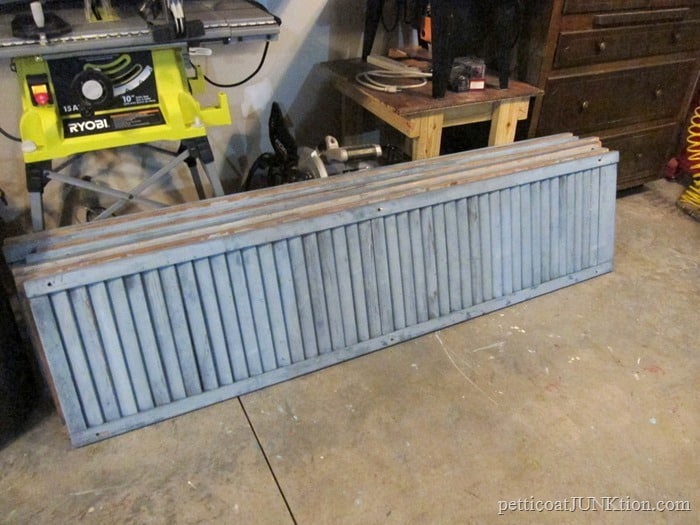 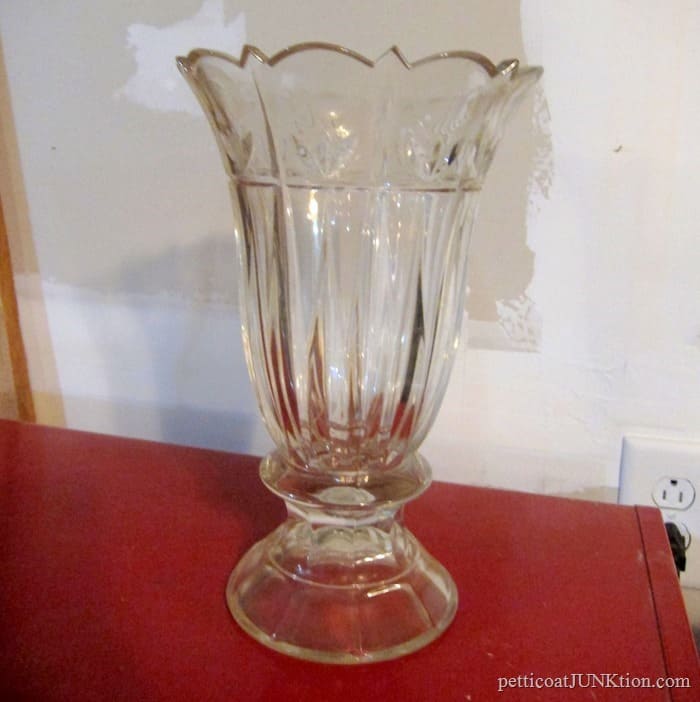 I need this vase like I need a hole in my head but I fell in love. The vase was $5. I’m not sure if it is collectible or what the pattern is. Can any of you help? It’s hard to see in the photo but the details below the rim are flowers with three leaves and a roundish bloom. 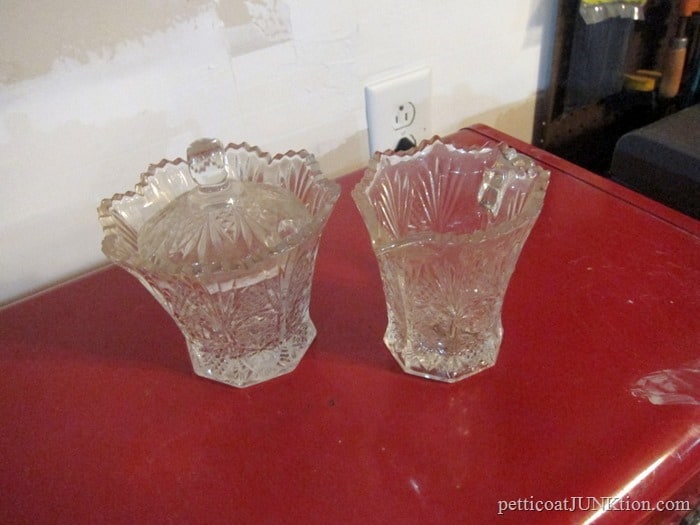 I don’t know what the deal was Saturday because I’m usually not a cut glass fan but I also had to have the sugar and creamer……$5. 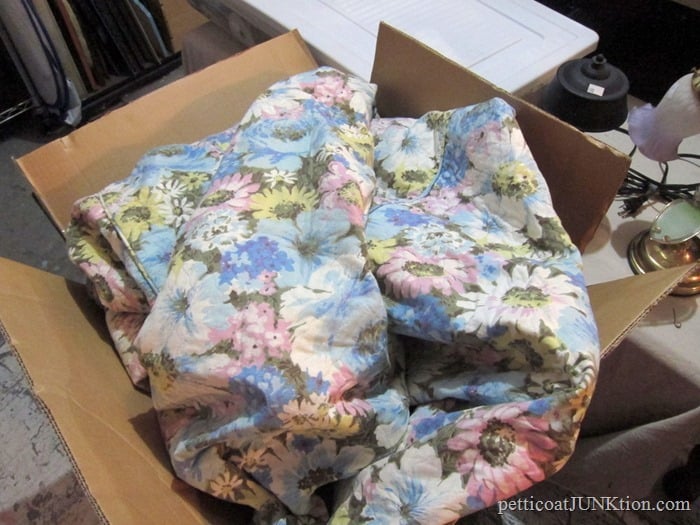 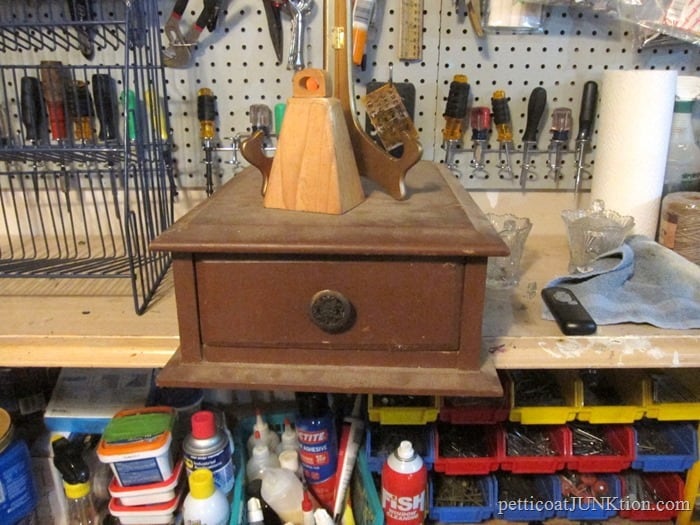 The wood box is one of two I got for $2.50. They are part of an antique dresser I believe. 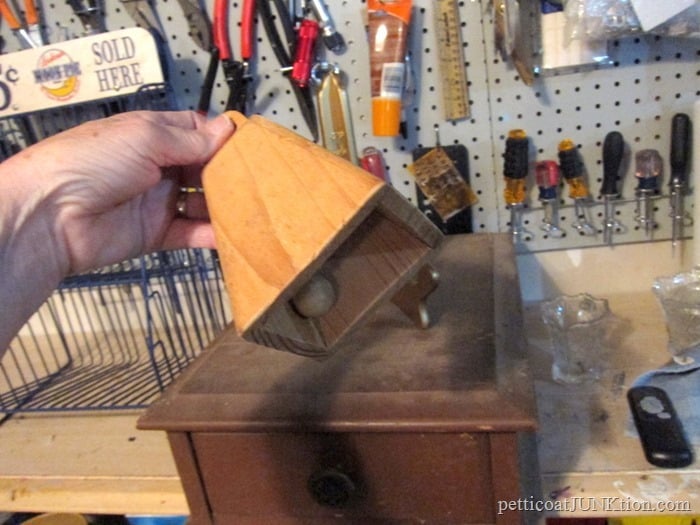 The wood bell was an auction purchase by the JTS. It was in a caddy of tools. I’m not sure that wood clangor is going to ring very loud against the wood bell. Cute though. 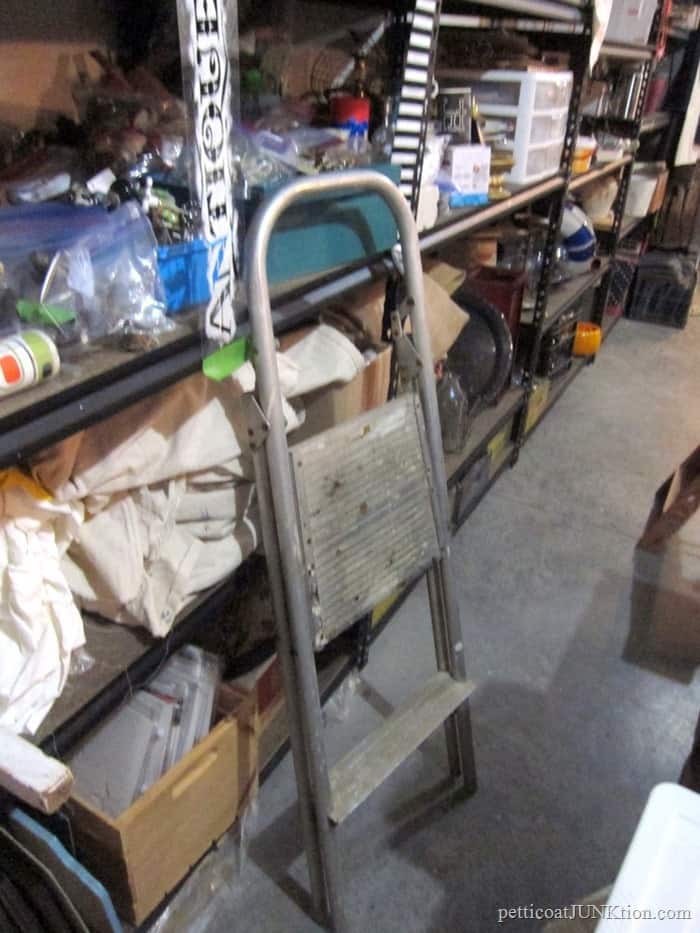 The metal step stool was $2.50. You can never have too many step stools. 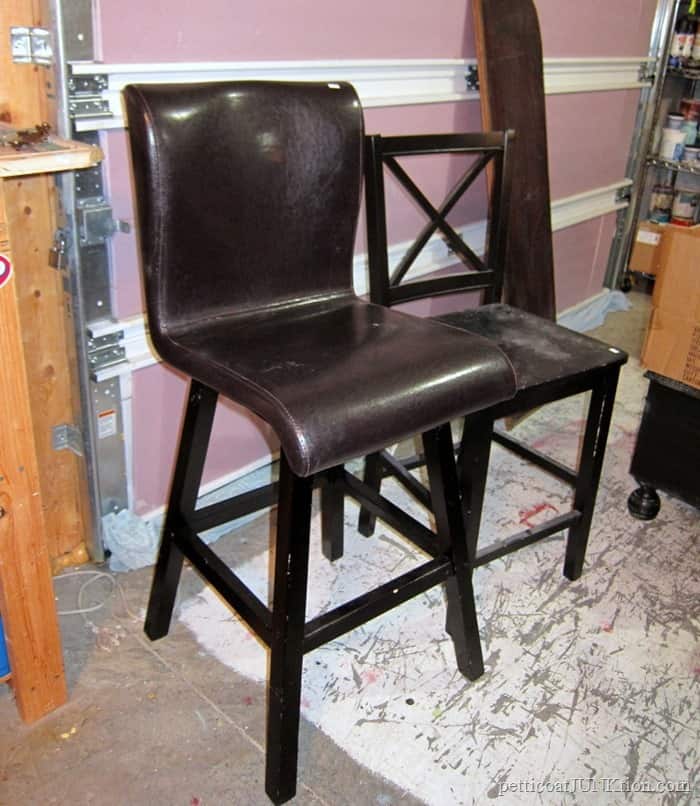 The bar stools were $3 each. I got some good deals didn’t I?? It was one of those days when the buyers just weren’t paying much. Works for me.

I may share an update on my parents in the next week or two. I’m in Arkansas right now for my second trip in the past month.

Thanks for being here and have a great day, Kathy