Talking about decorating a small bathroom today. Small bathrooms or any small room in your home are easy to decorate on a budget. I start with one item as the focal point and go from there.

Our house was built in the 60's and both bathrooms are tiny! One good thing is there isn't much to clean. The bad thing is.....there is no room. The new bathroom decor all started when I found a new shower curtain completely by accident. 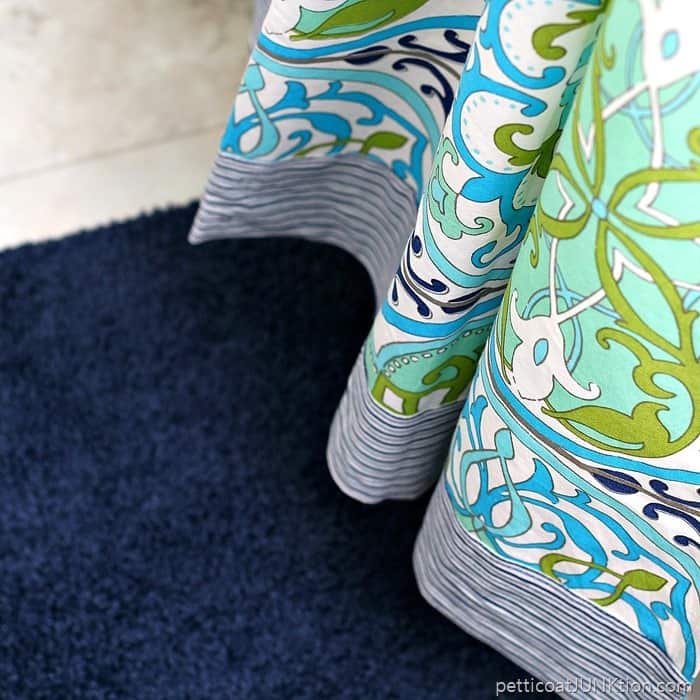 I bought the shower curtain in October (2016) and just last week opened the package. That’s the way I work. But there is a story so keep reading. 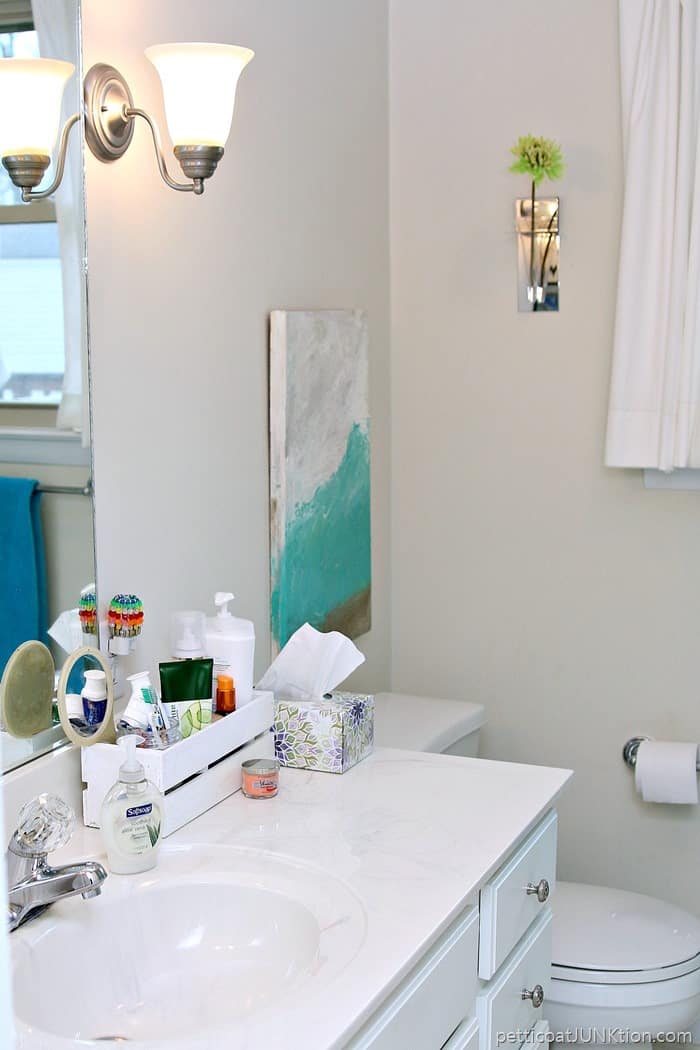 First we’ll take a look at the bathroom before I redecorated. The art work over the commode is one of my DIY’s. Not my favorite but Sofi and the JTS liked it so I left it up. I painted the unfinished wood crates last January and they work great for corralling personal stuff and guest washcloths. The one for the wash cloths sits on the back of the commode but I hide it in the cabinet until we have guests. 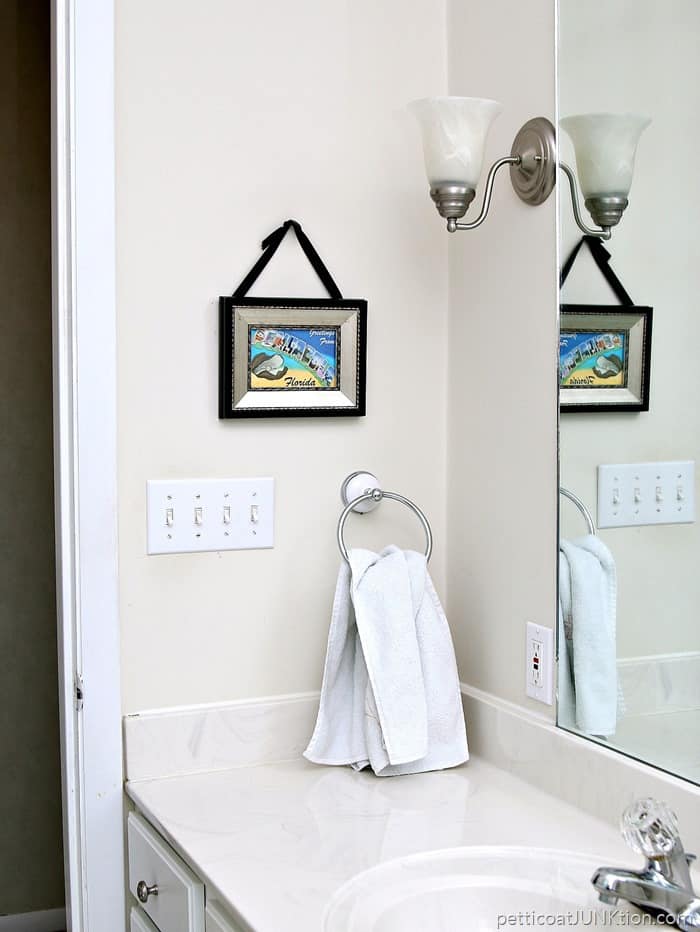 The framed photo over the towel holder is a “Pensacola” postcard. I bought the framed postcard when we lived in Florida. I added the ribbon as a hanger just for a little different look. Plus I didn’t have to put another nail hole in the wall. There's always a method to my madness.

Before the postcard thing I had something else hanging in that spot. It was longer than it was wide. So to make the framed postcard look right hanging in the spot I added the ribbon. Ta-dah. No new nail hole. 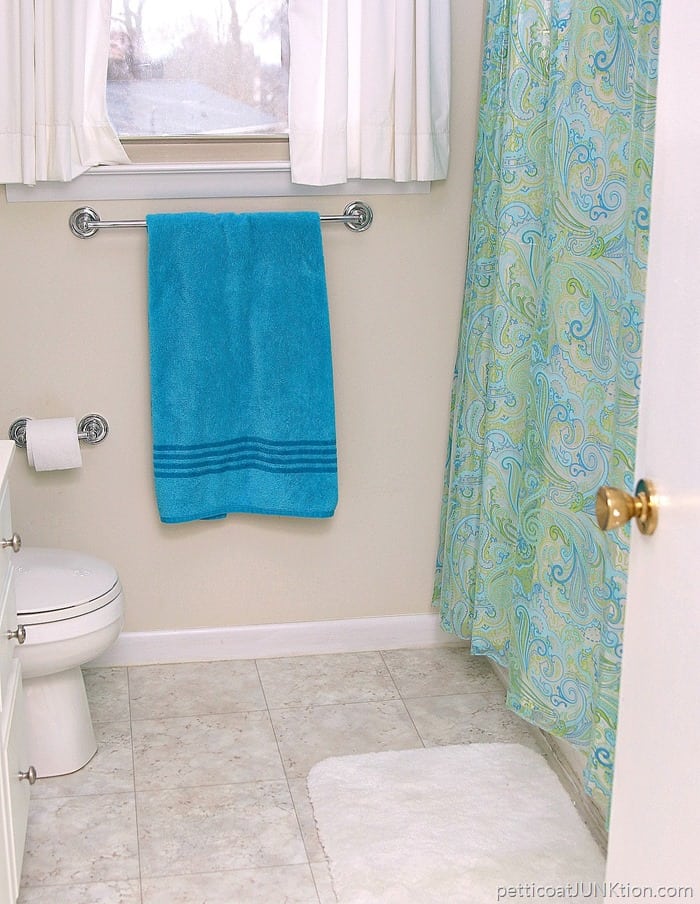 This shower curtain has probably been hanging here for 3 or 4 years. I can’t really remember. The shower curtain is clear vinyl with a pretty turquoise and green design. The curtain liner is white. I think I bought the shower curtain at T.J. Maxx for $5 or $6. Always thrifty. 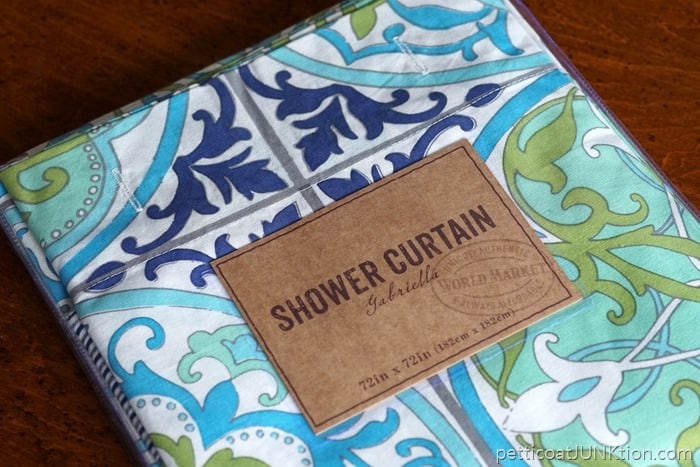 Back in October I went to a blogger get together at World Market. Well, I had to shop while there. The pretty Gabriella Shower Curtain was on sale for $17.99. Not a steal but a pretty good deal. Especially considering I don’t buy new shower curtains very often.

With Christmas and all that coming up I laid the shower curtain on the bed in the back bedroom. You guys probably remember what the top of that bed looks like. 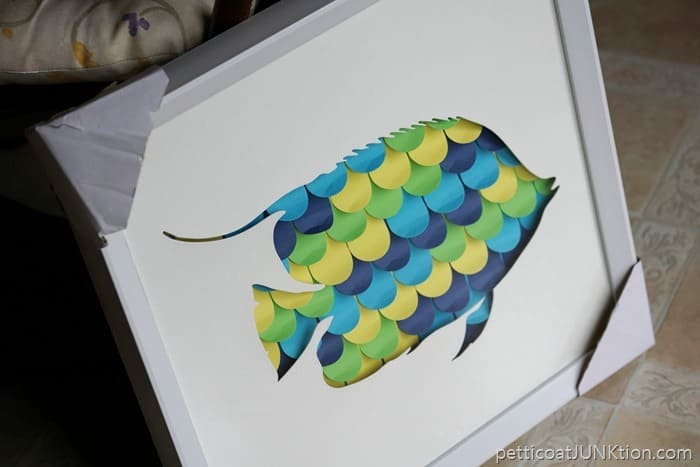 Moving on to December. I was shopping at Ollie’s Army. My first time. Have any of you guys ever shopped at Ollie's Army? It was a little wild. I spotted the “Fish” wall art and thought of the colors in the shower curtain. Fish…..bathroom…..perfect. The “Fish” was $10. I took it home and tossed it on the bed in the back bedroom. See a pattern? 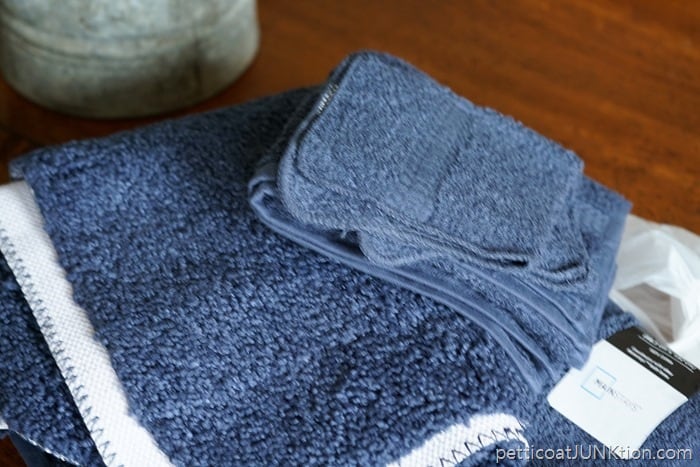 Moving on to late January 2017. I decided it was time to clean off the bed in the back bedroom. That meant finally hanging the shower curtain and the fish (and putting away the Christmas wrap, décor, etc.). I made a quick trip to Wal-Mart to buy a navy rug, bath towel, hand towel, and a couple of wash cloths. Might as well go all out. 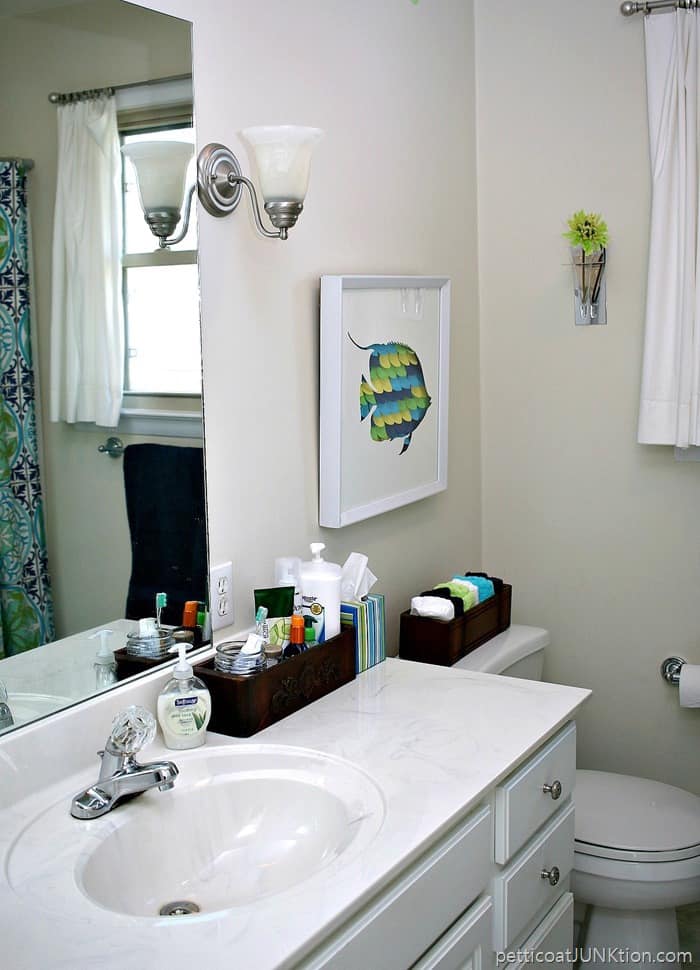 So this is what it looks like now. I bought the navy bath mat and towels because navy is in. Also the color is more dramatic. With the darker colors in the shower curtain I decided to replace the white wood crates with vintage sewing machine drawers. 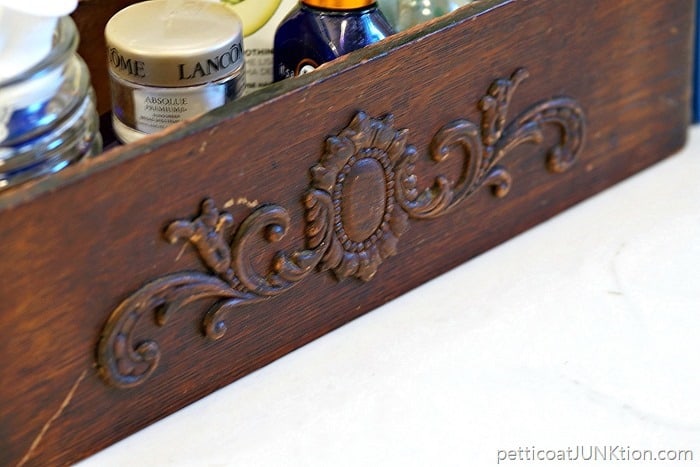 I just happened to have a couple in the workshop. Once upon a time I used this one with the decorative wood applique to hold cook books on the kitchen counter. Turns out the drawers were the perfect size to hold my bathroom products and the guest wash cloths. 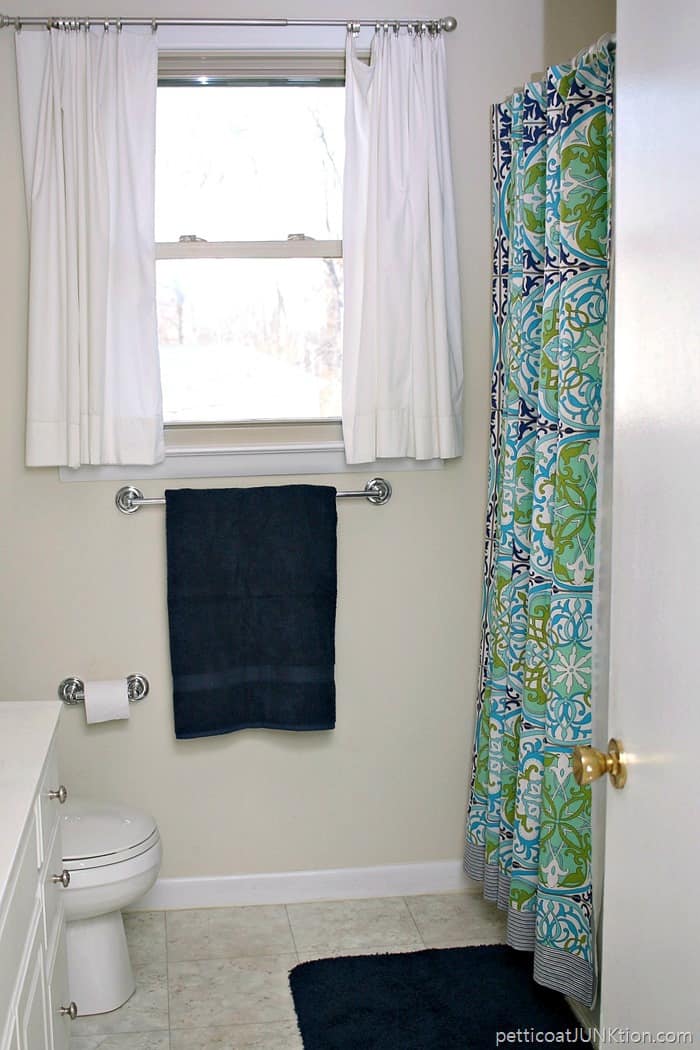 I love the deeper, richer, colors of this shower curtain versus my old one. 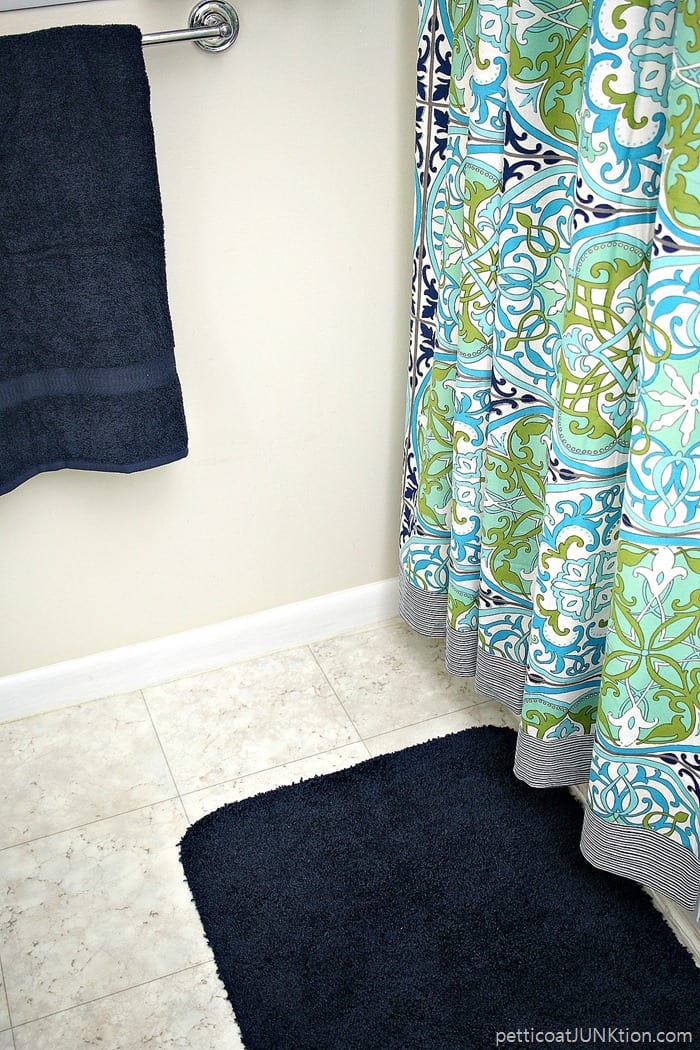 The navy stuff from Walmart was a pretty good match too. 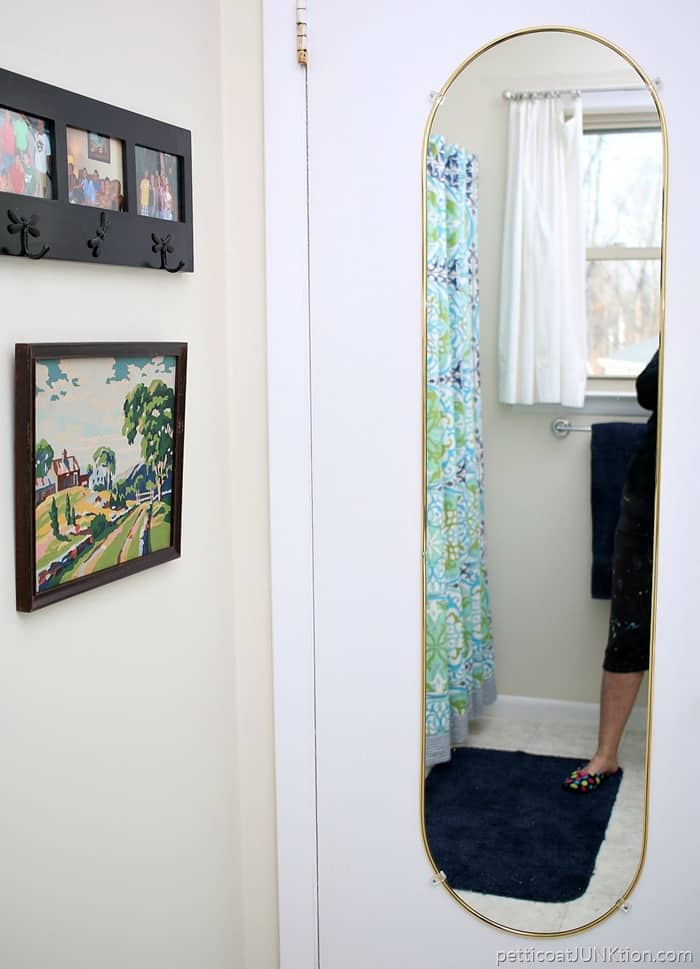 I hung the full length mirror on the back of the bathroom door many years ago. I think about 15 years ago to be exact. The towel hanger/picture holder has been there a while too. I decided my paint-by-number yard sale buy would look awesome with the new stuff…. and it does.

There just happened to be a nail hole in just the right spot to hang the paint-by-number. (That's my leg in the mirror.... colorful spotted house shoes and paint splotched work out pants). 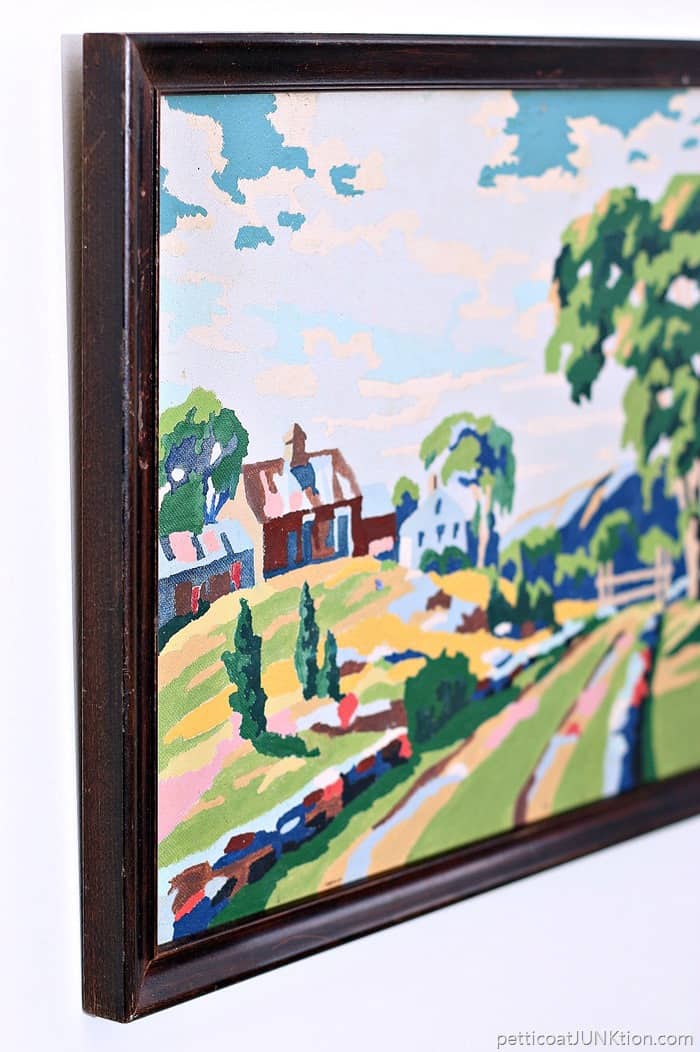 This is the first vintage paint-by-number scene I’ve ever liked. Maybe my tastes are changing. 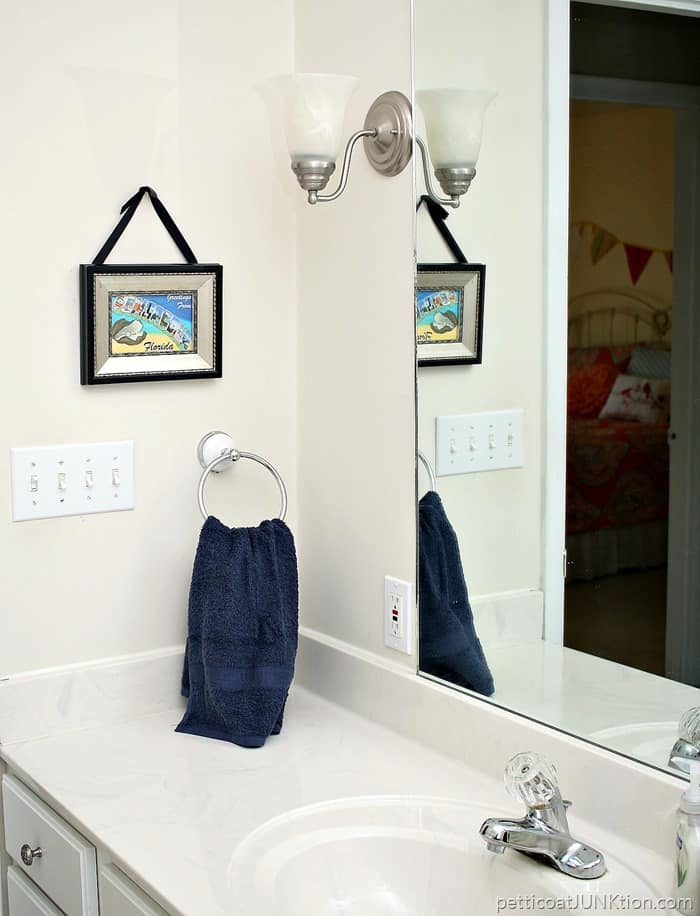 I left the framed “Pensacola” postcard right where it was.

I searched Amazon in case any of you guys wanted to buy a shower curtain just like mine. I found one but you won't believe the price…….$88.95. Who in their right mind would pay that much for a shower curtain. I then went to World Market online and the shower curtain is on sale for $13.48. Much better.

My bathroom decorating or redecorating cost less than $50. Using things I had on hand helped me give the bathroom a whole new feel. I love the deeper, richer colors….and the fish. The only thing I'm not happy with are the white pillowcase curtains. I'm ready to get rid of them or do something to them. Still thinking.

We just recently painted from ceiling to closet to walls in our back bedroom and I totally redecorated. The walls are white and the main color is Navy. You can see the reveal here....Navy And White Bedroom Makeover Reveal Before And After

We then redid a second bedroom from top to bottom. The reveal is here....Guest Bedroom Makeover Before And After | White With Pops Of Color

What do you guys think of the changes? Leave me a note in the comments please. Have a great day! Kathy